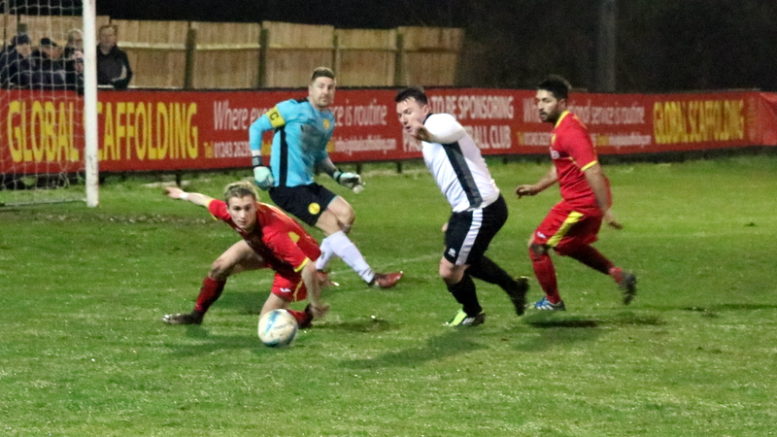 Dan Simmonds couldn’t carry his team to victory as Pagham were forced to share the points in a disappointing 1-1 draw with Arundel in this SCFL Premier Division match.

A win for Pagham could have sent them overtake Saltdean into fifth place on goal difference, but instead they remain in sixth, on 48 points and 12 points off the top spot.

There are 12 league games left for the Lions and they remain in the title chase but will need every point they can get from now on if they are to challenge for the league.

Pagham have been in fine form as of late, currently unbeaten in the last seven league games (10 in all competitions) and hitting the back of the net 35 times in those 10.

Their opponents in this match are in a relegation battle, currently sitting third-from-bottom, now on 21 points after this result, but they did enough to shut Pagham out and earn themselves a point.

Simmonds started brightly for Pagham and he had the first chance after just 90 seconds when his shot flew just over the crossbar.

Moments later the ball was in the back of the net as James Thurgar fired in a good cross from the left that found Simmonds at the back post and he couldn’t miss.

A quarter of an hour gone, and the hosts were back in the game after a fast break down the right resulted in a cross that found Josh Biggs, who blasted the ball home.

A header from Joe Booker that was well-saved rounded off the action for the first half and the teams went in all-square at the break.

Substitutions were made, and the teams took to the field to begin the second half and the first real chance fell to Arundel but Lions keeper, James Binfield, made a good save to keep his side in the game.

Not long after, a great chance came and went as the home side’s keeper saved a low drive from Callum Overton and the ball was sent airborne, but Simmonds failed to get his header on target with the goal at his mercy.

To round off a miserable afternoon for Simmonds, who is currently second top goal scorer in the league on 25 goals, the striker was put through one-on-one with the keeper and hit his shot straight at Daniel Stevens.

The Lions will have another chance to increase their league standing this weekend when they take on mid-table Broadbridge Heath at Nyetimber Lane.