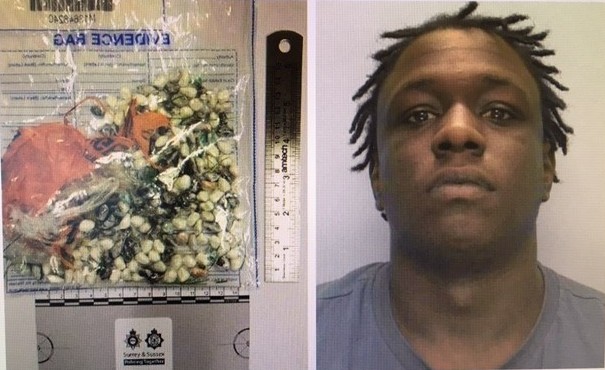 A teenage drug dealer has been jailed after he was found to have hidden heroin and crack cocaine his his back passage after being stopped by police in Bognor.

Kamali Gabbidon-Lynck, 18, was arrested at a property in the town’s Queensway, on August 18, after it was believed, through an intelligence-led investigation, that he was involved in the supply of drugs.

He was found to be in the possession of a large amount of cash, a small piece of cannabis resin and two mobile phones. An inspection of the phones confirmed the police’s suspicion that Gabbidon-Lynck was involved with drug supply.

The teenager, from Enfield, London, was taken to Chichester custody to be searched but police suspected he was concealing items in his rectum and he was taken to St Richard’s Hospital in for an examination.

Gabbidon-Lynck attempted to escape the police, but officers stopped him and spotted he had a bulge, about the size of a golf ball, in the back of his jogging bottoms by his calf. This was believed to be the drugs he had concealed in his body and further inspection of the package revealed it to be wraps of crack cocaine and heroin with an estimated street value of £1750.

He pleaded guilty to all five accounts and was sentenced at Lewes Crown Court on September 22.

The court also ordered Gabbidon-Lynck to pay a total of £165 for court charges, a victim surcharge and a fine for both possession of a class B drug (cannabis) and obstruct or resisting a constable in execution of duty.

Detective Constable Jo French of West Sussex Investigations at Chichester said: “We were able to take a large quantity of drugs off the streets and this, along with the court result, is a great achievement for us. We will continue to work hard to tackle this type of offending and keeping the communities safe.”

Chief Inspector Justin Burtenshaw, district commander for Arun and Chichester said: “Lynck was preying on vulnerable individuals in Arun in order to deal drugs. This sentence reflects the seriousness of the offence.

“We are working to make Arun a hostile area for drug dealers and this is one of several recent arrests for possession with intent. I would urge members of the public to report any suspicious activity to us including drug dealing.”