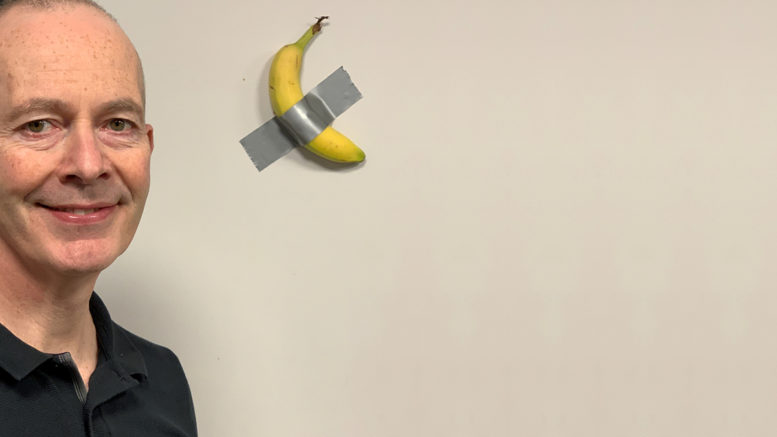 Bognor Regis artist Daren Terry wants the fruits of his creative labour to help boost the hungry and homeless this Christmas. Daren, the hair stylist who has hit the headlines for his imaginative haircuts depicting various stars, has replicated an installation by Italian artist Maurizio Cattelan that has just sold for around £100,000 in America.

The piece, originally hailed as “a symbol of global trade, a double entendre, as well as a classic device for humour”, is a banana duct-taped to a wall — and it has made global news thanks to artist David Datuna, who grabbed a fruit from a gallery wall and ate it.

Now Daren’s version is being auctioned off to raise funds for homeless charity Stonepillow as well as the Bognor Regis food bank — and has already attracted some generous bids.

Daren says it’s a great bit of fun and a fantastic way to boost the coffers of the charities.

He said: “We’re making it a silent auction so we can raise the most we possibly can and already some people have been bidding! As a salon we are very aware that we are part of a community and that we must do all we can to help those who perhaps are less fortunate than others. Stonepillow and Bognor Regis food bank are very worthy cases and what they do for needy people resonates even more at this time of year.”

Daren, who runs the popular Lotus Styling hair salon in Aldwick Road with wife and co-owner Kate, added: “We thought we would try to help them in the run-up to Christmas. It will hopefully raise a decent amount of money to be shared between them and we know that it has already raised lots of smiles among our clients. And with the festive period around the corner, the food bank is especially in need of people to donate food.”

A spokesman confirms: “Our foodbank relies on your goodwill and support. Over 90 per cent of the food distributed by foodbanks in The Trussell Trust network is donated by the public – that’s why your food donations are absolutely vital to our ability to give everyone referred to us a balanced and nutritious three-day supply of food.”

Stonepillow offers shelter, information and support to empower homeless and vulnerable individuals to make positive changes in their lives. “We are a homeless charity for the Chichester and Arun Districts providing a recovery journey for our clients which focuses on the key areas of health, housing and work. Stonepillow operates hostels and hubs in Chichester and Bognor Regis, together with a recovery service and supported accommodation.”