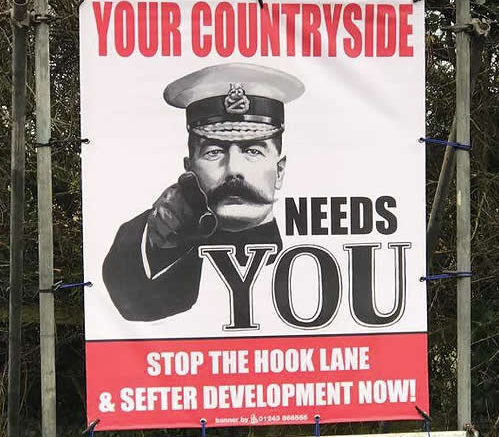 Residents have “gone to war” over plans to build houses in Pagham. A group of disgruntled protestors have used the time from an iconic poster from WW1 to get their message across.

Instead of Lord Kitchener’s original “Your country needs you” troop recruitment message, the angry residents have wording aimed at saving the countryside from developers.

It is all in opposition against plans for a new development of 250 homes with the potential for more than 3,000 new houses to be built on sites at Hook Lane and around Pagham, Rose Green and Aldwick.

Back in the summer, Rose Green Road resident Gill Homer told the Observer:

“I’ve lived here for 54 years, all my life and my house backs right on to where they want to build. I see it flood nearly every year, and if they put 250 houses there, that water has to go somewhere.”

“That’s not to mention the traffic around here which is already dreadful, umpteen cars end up in the ditch along Pagham Road every weekend. We just don’t have the amenities for so many more people.”