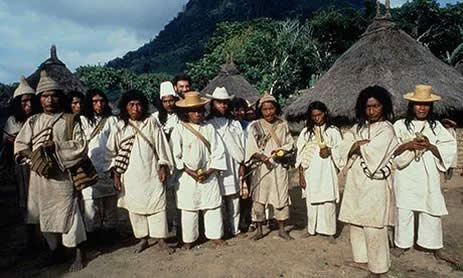 Welcome again to the Shaman’s world. I have been reading recently about the Kogi tribe who live in the mountains of Columbia a tribe who resisted contact with the white man for centuries, effectively going into hiding so that they could retain their culture and continue with what they see as their role in the world. They refer to us westerners as “little brother” and to themselves as “elder brother”

We are known as little brother because of our childishly petulant and foolish ways. The way they see it, we destroy just about everything we touch and take selfishly and endlessly from the Mother Earth without ever giving back or doing anything in return. A road that they believe will lead to the destruction of mankind and possibly the death of the planet.

Their role is to nourish and feed nature, the earth and the spirits of nature in order to maintain the balance necessary for everything to continue to thrive. They came out of hiding and allowed themselves to be filmed in the 1990’s so that they could pass on a message, a warning in fact of just how destructive our ways had become and of how the world was reaching a point of no return.

They said that they could no longer maintain the balance because we had pushed them off of most of their land and were destroying it.

These warnings were twenty years ago now and of course we have not changed our ways.
I wonder what they would say now.

Have we gone to far? Is there in their view now no way back?

It is January 2017 and in London we passed our agreed limits for annual air pollution on the fifth day of the year, three hundred and sixty days short of our agreed target. I visited a park near Twickenham around that date and even in that leafy suburb the air tasted and smelled of chemicals and fumes. I was alarmed to say the least!

Is there no way back?

I believe there is. In the Shamanic world nature, is respected, admired and honoured in all of its forms. I previously shared an exercise with you on working with trees. A method of feeling and formulating you’re own opinion of what a tree actually does. What its role is in nature. Many indigenous cultures around the world believe that we have a role too. A role as guardians and protectors of nature of our local environment.

Maybe it is time to reclaim that role. Starting of course, in a small way, planting flowers, shrubs and trees, feeding birds, creating habitats for insects. Doing simple things that encourage life to flourish. It’s an amazingly satisfying thing to do and puts as right back in touch with nature.

We can’t go back to being hunter gatherers, living off the land but we can each do a small thing to help the land and therefore all of nature to thrive. To reclaim our connection to nature, to feel part of it again. I for one know that I don’t do nearly enough but I promise now to start doing a bit more. Would anyone care to join me?