Scaffolder Ashley Pulley-Blank has been jailed for two-and-a-half years after he crashed his car following a police pursuit.

Pulley-Blank, 27, from Glenelg Close, Bognor Regis, was spotted by an officer driving away from The Lion Pub on Nyetimber Lane on 16 October, 2016.

The officer pursued the BMW convertible along Nyetimber Lane and Hook Lane before it collided with another vehicle pulling into the petrol station on Rose Green Road.

In the aftermath of the initial collision, Pulley-Blank’s car came off the road and collided with a tree and a road sign before overturning.

Pulley-Blank fled from the scene but a search of the area found him hiding in Pembroke Way and he was arrested. 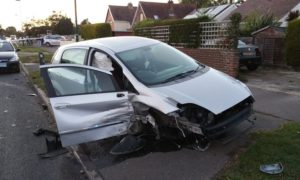 At the time of the offence, Pulley-Blank was serving a six month suspended sentence for 24 months for dangerous driving and was disqualified from driving on 10 October, 2016. 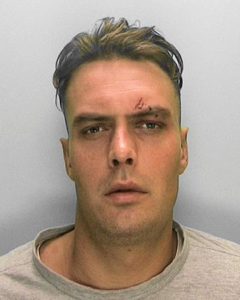 Pulley-Blank appeared at Portsmouth Crown Court on 30 August and he was found guilty of all seven charges.

As well as the custodial sentence, he was disqualified from driving for four-and-a-half years. PC Mark Stoner said: “Pulley-Blank showed a complete disregard for anyone’s safety on the day of the pursuit and it was lucky that he didn’t seriously injure anyone in the incident.

“I am very pleased that a dangerous individual has been prosecuted to the full extent of the law and has been taken off the roads for a long time.”