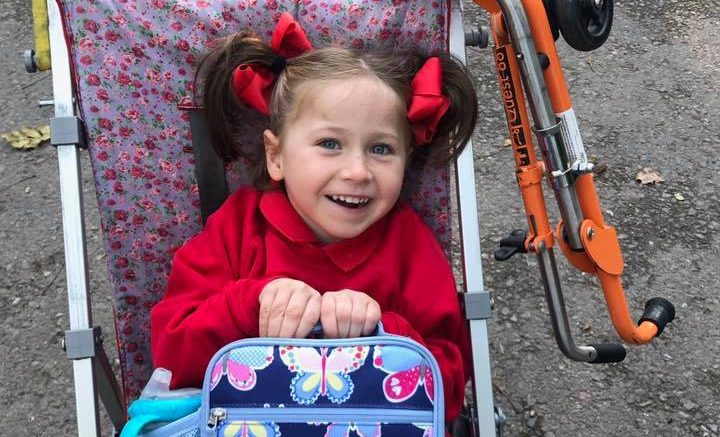 Poppy needs funding for trips to Canada for specialist treatment at a health-in-motion clinic to continue intensive treatment.

And Mr Riley, a partner in the company which runs town centre pub the QE2, is staging a fundraiser with the help of former middleweight champion of the world Steve Collins.

An Evening With the Celtic Warrior takes place at Pagham’s The Inglenook on November 3, and Mr Riley hopes to raise as much money as possible for such a deserving cause.

He said: “It should be a great night and already we have lots of interest. But, of course, we want as many people as possible to come along, or support the cause with donations, and raffle prizes.

“There is a chance to meet and chat with Steve and have your picture taken, and enjoy a three-course meal and see a celebrity hypnotist we have lined up, too.” 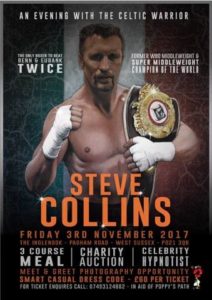 Poppy’s problems began when she was born in 2011 when, due to a prolonged labour, she contracted
pneumonia while still in the womb. This was not picked up and 20 minutes after her birth she had to be resuscitated for 45 minutes and then incubated.

She was placed in a cooling system for three days and spent the first month of her life in a neonatal ward. Due to Poppy’s collapse she suffered a lack of oxygen to the brain and her MRI scan confirmed sufficient damage to her brain. It was feared she may never walk, talk or feed orally.

But she has made remarkable progress despite her ongoing battle and started school earlier this month. And delighted mum Hayley said: “Poppy’s big day finally came! She started school and she did so well and enjoyed every minute!

“As we always really hoped she would she walked some of the way down the path into school with her walker. Just can’t believe our lovely girl is now at school! The past six years have flown!”

Mr Riley wants to help the Poppy’s Path campaign that helps pay for the much-needed trips across the pond to continue her progress. He added: “She’s a real star and deserves all the help we can give her. I hope we get a fabulous turn out and can make a great donation to a beautiful and brave little girl.”

Have a heart! Aldingbourne Trust look to Valentine’s Day to help with fundraising bid at Bognor venue