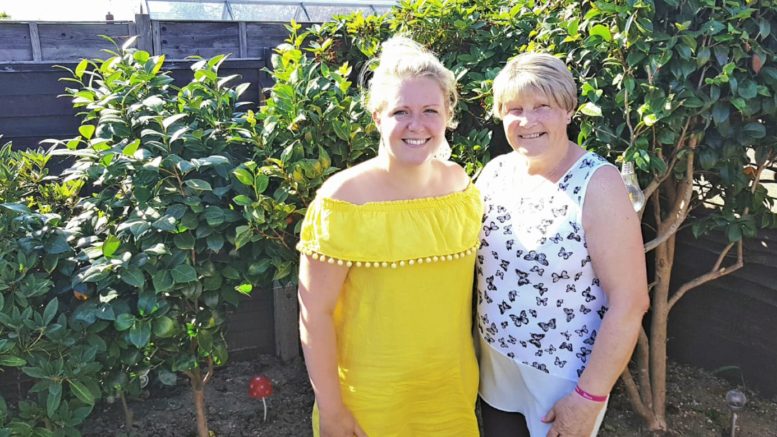 Mum Kady Hamm has urged women to undergo cervical screening after the test saved her life. Now Kady, along with another cancer survivor, Margaret Booker, is helping to organise a charity fundraising and awareness day on behalf of Jo’s Cervical Cancer Trust.

Friends and family members are rallying behind Kady and Margaret to stage the event at Newtown Social Club in Bognor Regis on September 2 to boost the coffers of the trust, the only UK charity dedicated to women, their families and friends affected by cervical cancer and cervical abnormalities.

Kady underwent a hysterectomy as part of her treatment but she says she is so thankful to have come through the ordeal.

She explained: “I just want to highlight and voice how important cervical screening is. Earlier this year, a week before my 30th birthday I was diagnosed with cervical cancer stage 1B. I began to show symptoms a few months after having my first baby last year but I wasn’t too worried as I thought it was likely to my hormones or the after-effects of having a baby.

“I went to my GP just to put my mind at rest and they thought the same. However, I was due to have my cervical screening test so this was booked in. My results from my scan and further tests confirmed I had cancer. This was heart-breaking to me and my family.

“The following examinations and scans showed the best treatment for me would be a radical hysterectomy. This was a major surgery but the results from the histology showed I would not need any further treatment just regular check-ups and my consultant says there is over 95 per cent chance that this cancer will not return.

“If it wasn’t for regular cervical screening my course of treatment could have been different and a lot less positive. I know many women will feel embarrassed and may feel this will never happen to them especially at a young age. But please do not be put off by this.

“A matter of minutes having your screening by official nurses (who see and do this all the time and will make no judgement) could make a big difference to your life. Cervical screening saved my life. I may not be able to carry any more babies but I have a child and I’m lucky enough to be able to watch her grow and look forward to enjoy the rest of my life with friends. I feel truly blessed and so lucky.”

Margaret has just been told her latest scan shows she is cancer-free. She first was alerted to a potential problem in July last year after suffering from heavy bleeding. Subsequent scans showed she had cervical cancer 2B. Margaret has undergone treatment including radiotherapy, chemotherapy and brachytherapy.

And she says she is thankful to the help and support of her family and friends through the worrying times. She said: “I wish to thank my two children who have been fantastic throughout, coping with me and also their emotions, travelling to and from hospital appointments and also my daughter-in-law and son-in-law. Hopefully 2019 will be much better for me and Kady.

“It’ll be lovely to see as many people as possible at the fun day, where we will have fun stuff such as tombola, inflatables, a raffle, BBQ, craft stall, plant stall, cakes, face painting and much more!”

Poignancy of a lone poppy: Hair salon saluted for touching tribute to fallen…