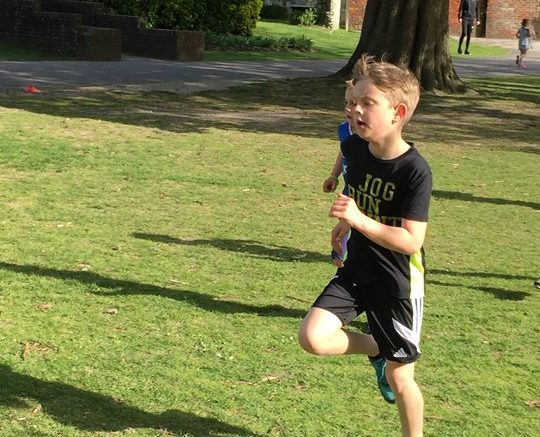 Little Lennie McCormack has taken in it in his stride when it comes to raising money for sick children…literally. For the keen runner, aged seven, is on his way to miles of smiles for unfortunate kids thanks to his charity runs of two kilometres a day for the month of April.

Lennie decided to help children at St Richard’s Hospital, Chichester, by undertaking his running pledge, which will reach a total of 38.5 miles, and has so far raised £440 of the total that has been set of £500.

And the inspirational youngster has also been in the spotlight for his efforts, giving interviews on the radio and appearing in various printed media, too.

Lennie’s crowdfunding page reads: “After spending some time in Howard Ward, Lennie wanted to get something to give the sick children that were there.  The time we spent there was only short as it has been so many times before and as it is for so many!

“But this time Lennie, aged seven, came away wanting to give something back. We talked about what he wanted to do and he has decided to run 2km everyday in the month of April. He loves running and has been inspired by his weekly park runs, he wants to use this to help him raise money.

“We have a ‘wish list’ from the ward for both toys and equipment and he would love to raise enough money to get something that would make a difference.

“Please give as much or as little as you can as it will all count towards what we can get to help not only the children but all the staff on Howard Ward.”

Mum Kate McCormack added: “Lennie is overwhelmed by all the support he is getting and excited to be able to get the children and staff lots of great things.”

To donate, go to www.justgiving.com/crowdfunding/Lennie-mccormack