Business owners Daren and Kate Terry say they have been overwhelmed by the reaction to an emotive window display in their hair salon to mark 100 years since the end of the First World War.

The touching tribute, entitled Lone Poppy, has been installed at Lotus Styling in Bognor Regis as the countdown continues to a series of nationwide events staged to honour the war dead.

And stylist Daren says the response from the Aldwick Road salon’s clients and passers-by has provided a fitting memorial for those who have given their lives in service of their country. He said: “We always sell poppies for the appeal and this year, seeing as it is particularly poignant, we thought we needed to make our own contribution to the memory of those who perished.

“The emotion from people who have seen the Lone Poppy display in our salon window has been tangible. As well as our customers appreciating the significance of the artwork, the general pubic, too, have done so.

“We’ve had many people come in off the street just to tell us how impactful the window is and we appreciate their observations. The whole point of Lone Poppy is to raise awareness of the cause and to enhance the Poppy Appeal collections.” 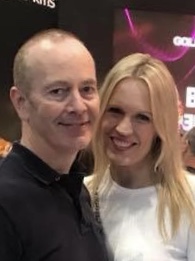 Remembrance Sunday falls on 11th November this year, exactly 100 years to the day since the Allies signed the Armistice with Germany in France at the “eleventh hour of the eleventh day of the eleventh month” to end the conflict.

This year’s Poppy Appeal is the The Royal British Legion’s biggest ever. The charity hopes to raise £50million for service men and women, veterans and their families.

Lone Poppy is the first of many special window displays planned by the popular husband and wife team to mark the celebration of 30 years of being in business in the town.

And Kate adds: “It’s a special anniversary and we have plans to make it a milestone to remember. We look forward to sharing these moments with our clients, staff and family members.”