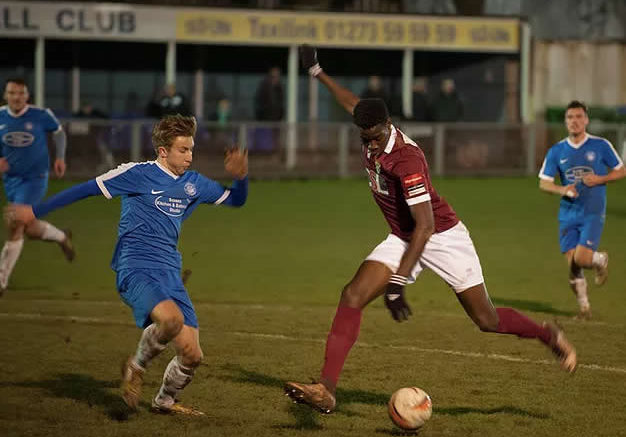 Adebayo has joined the Nyewood Lane outfit on a month’s loan from Championship Fulham and made his Rocks debut in the 3-1 win over Shoreham in the Sussex Senior Cup on Tuesday.

Now he is set to lead the line in two crucial Ryman Premier League matches for table-topping Bognor, and Howell admits he is keen to see him in action.

Adebayo, 18, was on loan at Slough earlier in the season and fired a hat-trick against Howell’s men in a 4-1 reverse in the FA Trophy.

Now he is going for goal in green and white and starts tomorrow (Saturday) against Enfield Town and then again on Tuesday against Needham Market, who are in second place.

“I am looking forward to seeing Elijah play and the timing is right for us as Jimmy Wild is out for six few weeks with a knee problem.”

“He did well at Shoreham in the week, and he adapted well given that the pitch there wasn’t the greatest. But he is still a young lad, and at 18 I am mindful that there will be a lot of expectation on him given that he scored a hat-trick against us this season.”

Meanwhile, Pagham — sitting fifth in the table — are on the road when they go to seventh-place Newhaven in the Southern Combination Premier League. Mark Bennett’s side will no doubt have one eye on Wednesday night when they host a development squad from Brighton in the Sussex Senior Cup.

The Looters services of manager Ted Griffin, who has taken a mid-season sabbatical to Thailand with club captain Philip Turner.

The absence of Griffin sees club chairman and ex-manager Charlie welling return to the dugout. Welling ended his reign as manager last year after 6 years at the helm which saw him win 96 out of 134 games and winning 7 titles in the process.

“It was a great period for the club but I felt it was the right time to move upstairs and let someone else take over. Ted has been great and we’re unbeaten so far this season. He’s surpassed my 72% win ratio and the quality of football and the goals we’ve scored have been bloody excellent.”