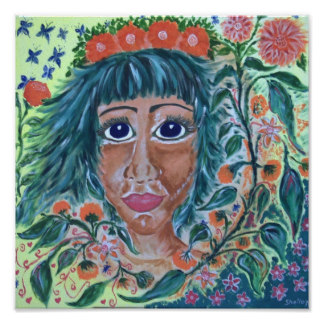 by PAUL AYLING, The Shaman: Many, many moons ago the people understood the secrets of the earth. How our planet lived and thrived and how each and every creature had a role to play for its own benefit and the benefit of all nature. By fulfilling that role the creatures gave back to Mother Earth, helping her to stay balanced and productive. The creatures all took what they needed as the life and death of everyone of them fed the cycle of creation.

The Shamanic belief is that we dream our world into being and Mother Earth dreamed a dream of incredible, incomparable beauty, with mountains and streams, rivers and prairies, oceans and deserts, all interconnected, dependent on each other.

Her dream came into being and so all the beauty of this planet and nature was created. A perfect environment for the abundance of nature that came to inhabit it. The bargain being that each had a role to carry out to enhance and protect.

Hence predators appeared that hunted certain species and kept their numbers in check, although they were not known as predators then.
When we look at the term predator it is easy to see that a horse or antelope predates grass, that insects predate foliage, that everything is a predator. The word itself is a judgement. All creatures need to feed to survive.

Sometimes the balance can tip in one creature or another’s favour but this balance will soon enough even out. A swarm of locusts for instance can become vast and do significant damage to plant life in its domain but as the locusts proliferate so will the creatures that eat them, birds, reptiles etc. The more food there is for them the more their numbers will increase until the balance is restored, it may take time but eventually it sorts itself out.

That is, until mankind, or most of it, forgot its role and started to change environments on a huge scale and wiped out all the large “predators” he saw as competition, breaking down the Eco-system, so that balance could not be maintained. An incredibly short sighted pathway to follow and one that goes against the dream of Mother Earth. It does not matter what religion or politics you follow, we all need the gifts of Mother Earth to survive. We need to find again our own balance so that the earth can find hers.

We talk a lot about climate change, global warming and such but this is not the cause of our problems, it is but one of the symptoms of a people out of balance. A people with no predators left other than themselves and so we kill each other in endless wars but seemingly not enough, so our governments arm themselves in preparation for greater and greater conflicts. Simply because we have lost our place and balance with nature, we march headlong to our own demise.

It’s time for change me thinks and as individuals we can only start small but start small we must.

My own small effort will be start a series of group workshops to help people to get back to balance with themselves, life and nature. Hence I am looking for people and places to hold these events in and around Bognor and Chichester. It’s about creating a community too, the more it grows the more positive energy we can create, so you’re help would be extremely welcome!

Email The Shaman at wuchipaul@hotmail.co.uk.