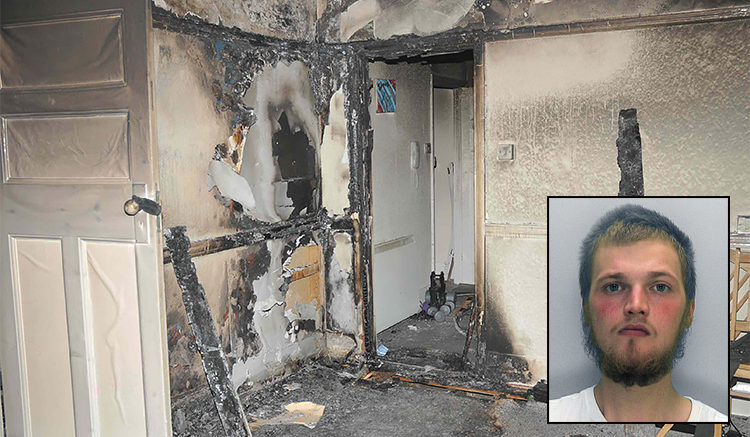 Teenager Michael Bissett has been convicted of arson with intent to endanger life and jailed for 10 years after torching a flat in Bognor Regis.

Police arrested two youths in connection with the blaze, which occurred at a flat in Aldwick Road at 2am on 11 November 2015.

The court heard how Bissett, who was then aged 17, and another teenage boy entered the first floor flat, before Bissett set fire to a sock. The lounge became engulfed in flames and, the sole occupant woke up 20 minutes later.

He was trapped on the first floor and had to jump barefoot onto the pavement below. He then managed to rouse his neighbour on the second floor by shouting and ringing the intercom, it is reported.

The neighbour held his breath and used the stairs to escape. The two men sustained minor injuries. Staff at a nearby care home alerted firefighters, who quickly dealt with the blaze.

The 17-year-old co-defendant, from Bognor Regis, who cannot be named for legal reasons, was acquitted of arson with intent to endanger life.

Detective Constable David Midgley said: “This case highlights just how dangerous fire can be; neither flat had a smoke alarm installed and it’s only through pure luck that the occupant woke up when he did. Thankfully, he had the chance to alert his neighbour and they managed to escape with minor injuries.

“A smoke alarm costs a few pounds and can provide valuable seconds in raising the alarm and I’d urge people to invest in one. The sentence handed down by the court reflects just how serious this crime is treated.”