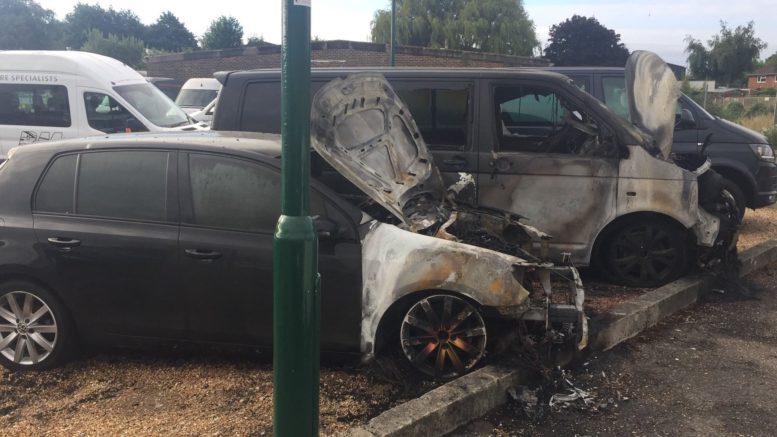 Bognor businessman Justin Kracke has spoken of the devastating arson attack which has caused damage of around £35,000.

Police have issued an appeal for information after the blaze at Bognor Motors Vehicle Solutions in the town’s Durban Roadat around 3.30am on Monday morning.

It is reported that it appears that vehicles were set alight by a small explosion by the front wheel then a second vehicle caught alight which then caused damage to a third.

Co-owner Mr Kracke, speaking to Spirit FM, said it was the neighbours who raised the alarm and he thanked the fire service for their prompt action.

He said that a smashed glass bottle was discovered at the scene, adding: “We assumed it may be a fire bomb which set light to the vehicle that side. Don’t know why but police are looking into CCTV in the area. It looks like it was started deliberately. The damage it has caused is properly between £30-£35,000.”

Bognor Motors Vehicle Solutions posted photos of the damage to their Facebook page with the message : “At approximately 3.30am this morning one of our vehicles was set alight at our Bognor branch –the subsequent blaze set alight a second vehicle which was next to it and caused damage to a third.

“We would like to thank our neighbours for raising the alarm and the Bognor Fire Brigade for their swift response to stop the blaze spreading to the other vehicles on site. Thanking our social media friends in advance for sharing this and we would appreciate any information should anyone hear of anything.”