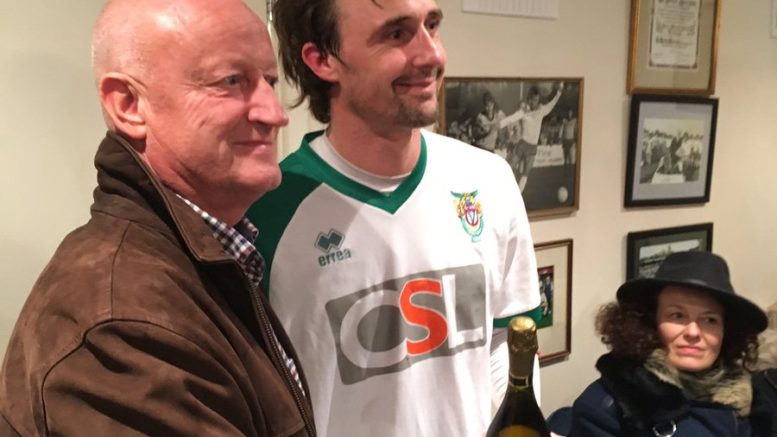 Shackle Ibra Sekajja! That could well be the message delivered by Bognor boss Jamie Howell to his rearguard for the winner-takes-all clash with Dulwich Hamlet at Nyewood Lane on Bank Holiday Monday.

Dulwich striker Sekajja, 24, hit a half-hour hat-trick in his side’s 4-2 victory over Enfield last night to set up the play-off final at the home of the Rocks following Bognor’s dramatic 2-1 win over Wingate & Finchley.

Hitman Ollie Pearce snatched a last-gasp winner on 94 minutes to the delight of the majority of the 1,001 fans to deny the visitors when they had drawn level after Pearce had made it 1-0.

And while Pearce bathed in the after-glow of being a two-goal hero, Gary Charman, who has had an outstanding season at the back, alongside Sami El-Abd, rightly picked up the man-of-the-match bubbly.

It all means Dulwich come to town once more and with former Crystal Palace attacker Sekajja in their ranks they will hope to replicate last season’s play-off win over Howell’s men, denying the Rocks a last shot at promotion.

Here we are a year down the line and still only one team is promoted automatically, leaving the success of a season’s toil to fall to 90 minutes of football.

Of course, Bognor had their chance to wrap things up with a win when they drew 1-1 with Met Police in the last league game of the season as eventual champions Havant only drew at Kingstonian.

But it wasn’t to be and now it’s back to the Nye Camp. And with a large contingent of travelling Dulwich fans expected there is a very real chance the attendance could touch the 2,000 mark. There were nearly 800 at the Met Police and Bognor supremo Jack Pearce has been encouraged with the gates the club has had this season.

He said: “It’s heartening that the fans have come along in the numbers they have. Now we need one final push and we hope they can come along and cheer us on once more against Dulwich on Monday.”