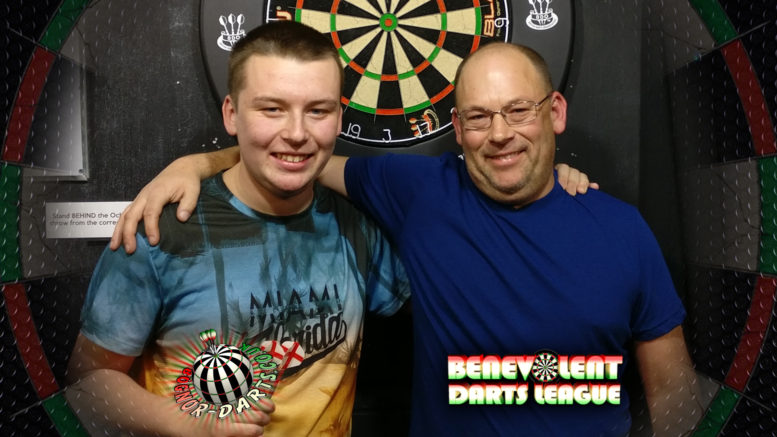 The action in the top three divisions took place at the Newtown Social Club where 44 teams took part, which was two more than last year.

The division two first semi-final saw Graham Crawley and Stuart Gray (QE2 Galleon) take on team mates Chloe Miles & Lewis Kalli. A tough fight eventually saw Crawley and Gray sneak into the final with a 2-1 win. The second semi-final saw Rob Rice and Derek Mitchell (Chi Snooker Club) against the Wingates. Rice was runner-up for the past two years but with a different partner. However, the Wingates, two of this year’s trebles champions, won 2-1 and sneaked past them.

The division two final saw the Friary pair win the bullseye, and start with 81 from Karl Wingate. A 140 from Gray pulled the score back, followed by 81 from Crawley, but a ton from Dave Wingate made the score even again. Both teams missed the first shots at the double, but with their opponents on double-top, Dave Wingate used all three  darts to finish off the first leg.

Dave Wingate started leg two with a ton, but Gray hit a massive 160 to take his team into the lead. He did the same on his next throw hitting 130, leaving Crawley with a chance. Crawley didn’t hit the double this throw, but he did on his next, taking the game to one all.

The last leg saw the Wingates start with a ton and 95 between them, while their opponents started slowly. Karl Wingate then hit a ton to leave double-top, but the scorer miss counted and put up 110. Dave Wingate went for it before anyone had noticed, but he missed. They then started to whittle their score down while Crawley and Gray got closer, but with a last ditch dart Karl Wingate hit double three to take the title.

The second semi-final saw a similar match, with Ian Kewin, and the third member of the victorious trebles team, Jamie Middleton (Newtown ‘C’) take on Wayne Green and Jack Danahar (Pagham CC). A valiant effort from the Newtown boys, but unfortunately the scoring power of the seasoned Pagham duo meant that Green and  Danahar went to the final with a 2-1 win.

The division three final saw the Pagham pair win the bullseye, but they only managed a slight lead all the way to the double in the first leg. The only ton came from Dan Middleton, but two scores in the 90s from Danahar allowed them to stay in the lead.

Misses from the Pagham duo allowed the Middleton’ to close the gap, but with only one dart Danahar hit double five for the first leg. The second leg saw an 85 and a ton come from Green, but a 140 from Dan Middleton allowed them a chance, a chance he missed two throws later. Eventually double-top was hit by Green, giving himself and Danahar the title.

Division one saw 20 teams take part, the second highest turnout on record. Four preliminary matches finalised the first round draw. The first round saw two 180s, from Colin Ragless (Friary ‘D’) who moved up a division to make up a team, and Jody Cooper (Claremont).

Both players helped their partners get them to the second round. The first semi-final saw Richard Ragless and Nick Wyatt (Friary ‘Z’) take on Gary Blackwood and Conner O’Hara (the Legends). Blackwood and O’Hara took out two of last weeks trebles champions, and one of last years winners Rob Collins (Friary ‘Z’) and his partner, one of last year’s runners-up, Wayne Wadsworth, in the previous round, but despite a 180 from Blackwood, Ragless and Wyatt managed to take the win 2-1.

The second semi-final saw Lee Franklin and Micky Rowland (Friary ‘Z’) against Andy Cooper and Jody Cooper (Claremont). Franklin was one of last years runners-up, and Rowland was one half of the champions, and managed to push their way into the final. 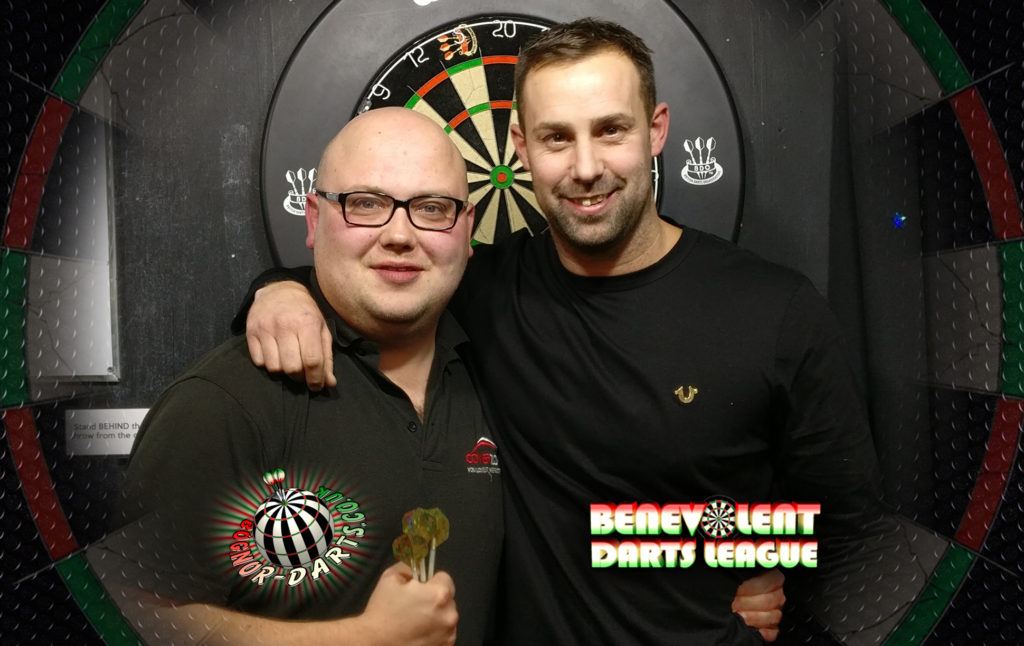 The division one final saw Franklin & Rowland win the bullseye and take the early lead. A ton came from Rowland, followed by 81 and 85 from Franklin, whilst a ton was hit by Wyatt, and an 87 was hit by Ragless, leaving 72. Rowland and Franklin had missed their doubles, so Wyatt had a chance at 72, hitting treble 16 with the first dart, but missing double 12 with the other two.

Rowland then eventually hit the double to take the first leg. Leg two saw Ragless hit 99 and Wyatt 100, but they were left in their opponent’s wake, as Franklin & Rowland hit three 140s on the trot. With 81 left, and a chance at an 11 dart leg, Franklin missed double-top, for the leg. Rowland then missed the double, followed by Franklin missing.

Before they knew it, Ragless had hit double-top in one dart to take the leg. The last leg saw a slower start, but Franklin & Rowland took the bull by the horns and forged into the lead as their opponents floundered. With double-top left again, Franklin missed again, but Rowland knew what he needed, and with his first dart hit double 10 for the leg, and the match, taking the title for himself and Franklin.

Flight of fancy! Keith on cue to get Bognor Summer Darts League plaudits