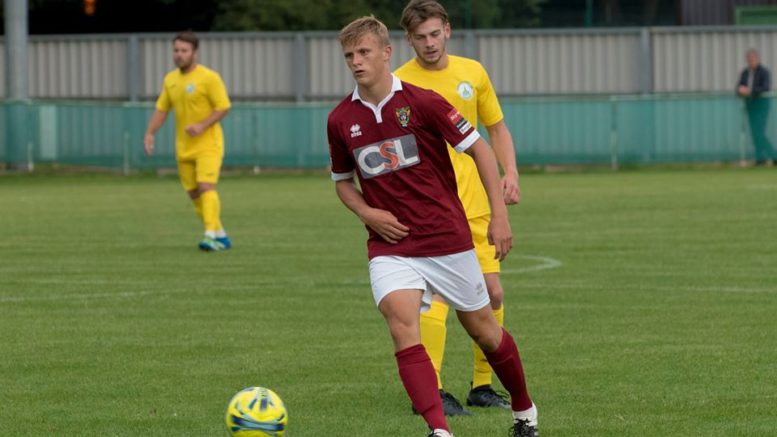 Bognor boss Jack Pearce has been busy recruiting ahead of the new campaign in the Bostik Premier League — and his latest capture, Tommy Block, can’t wait to kick-start the season.

Rocks were handed a huge boost by Block, 18 agreeing to pen a new deal at Nyewood Lane. He has been the subject of much speculation concerning his future with a clutch of suitors eager to acquire his talents.

But the midfielder, who made 38 appearances last season, has chosen to accept an improved offer to stay with the Rocks and turned down the chance to leave the club to play at a higher level with bigger financial rewards.

Block’s decision to remain at his hometown club has delighted manager Jack Pearce. He said: “It’s fantastic news for the club that Tommy has signed and I am positive he will be a huge asset to us going forward.

“He has a bright future ahead of him in the game and we hope that he will continue to develop under our tutelage.

“Tommy deserves lots of credit for his performances last season. We should remember his age and that he played most of the season for us in a tough league in a side that was relegated.”

Block, who operates in the middle of the park but who can also slot in as a central defender, says the decision to stay with the Rocks was “tough but also easy”.

He explained: “I can’t wait for the new season. One offer was for more money and at a higher level so it was tough to turn down but also easy to commit to Bognor.

“At my age I need to play as much as possible and I think I will get the opportunity to do that at Bognor.

“Despite being relegated last season there are lots of positives at the club and I hope to continue to learn from Jack and Robbie Blake, who is coming in as coach. Plus, I just love playing for the Rocks fans!”

The coup comes after Pearce moved to snap up left-sided utility man Harvey Sparks in a deal which sees the former Worthing player move along the coast.

Sparks, 23, can operate anywhere along the left though it is thought to prefer a left-midfield berth. And he proved he has an eye for goal, too – he scored eight goals in 41 appearances at Woodside Road last term.

Pearce is delighted with the acquisition of Sparks. He said: “We’re very much looking forward to working with Harvey. He has had six years at Worthing and it’ll do him no harm whatsoever coming to us to try to develop his game further. I think we will both benefit from that.