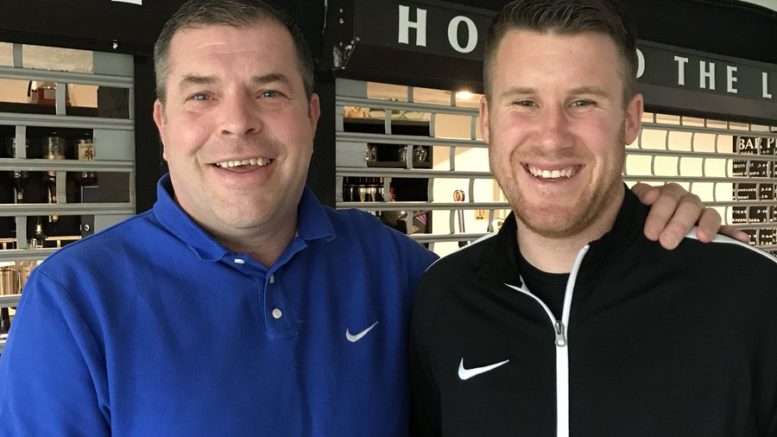 Pagham hope to make a couple more significant signings over the summer aiming to build on the season they enjoyed under joint bosses Richie Helens and Tom Simmons.

The club has just announced that George Gaskin, pictured with Tony Shea, will be at Nyetimber Lane next season after agreeing to rejoin the Lions.

We asked club media man Paul Davidson to bring us up to speed on how the campaign went last season as Pagham prepare for the new term.

He wrote: Well, that was an exciting season wasn’t it? From the highs of Sittingbourne, Littlehampton and Lewes, to the lows of Erith Town, Horsham YMCA, Haywards Heath and various home games where we dropped silly points. Add in the RUR Cup Final defeat and it was quite a season.

But let’s skirt round the negative bits (well, most of them!) and look at the good bits. And good bits there were in plenty.

Third place in the SCFL Premier was a great achievement considering it was with a young squad and a new management team. Runners up in one cup and semi-finalists in another was also pretty good and gave us all a great amount of fun along the way. And goals, wow! 100 league goals for only the second time in the clubs 115-year history and a whole pile of cup goals to go with them.

And it is impossible to mention goals without the name of Dan Simmonds who didn’t re-join us until the last week of October and rattled in 47 goals, including no less than seven hat-tricks, between then and the end of the season. And don’t forget his strike partner Callum Overton who chipped in with 26, giving the partnership an astounding 73 goals between them.

Everything started off well with a very promising pre-season in the heat of July (I still remember getting sunburn at Hamble) with goals a-plenty. The season started, and the goals kept flying in. An opening day 4-0 win at Arundel was followed by the same score in the home opener against Horsham, and then the glorious 1-0 win at Sittingbourne, despite one of the worst refereeing decisions ever seen, had us all purring. Mind you a home defeat to Peacehaven & Telscombe soon brought us down to earth.

It just seemed that for every great win, there was a miserable defeat to follow it, the perfect example was the 6-1 win at Littlehampton in the teeth of the season’s first storm, followed four days later by losing at Worthing United to a team that only had two shots all afternoon!

But then the wheel turned, and we went on a quite staggering run of success seemingly scoring goals for fun. The run, of almost three months with just one defeat in all competitions, included some breath-taking wins against higher division teams Lewes and Horsham FC in cups and the 3-0 demolition of eventual league champions haywards Heath at the Lane.

The season finished with another run of defeats, ironically at Haywards Heath which effectively ended our chances of promotion and the other in that never to be remembered cup final against a team from just up the road that cannot be mentioned!

For the reserves and Under 21s it was yet another great season for both. The reserves had a very up and down league season but made up for it in the cup.

The Under 21’s had the opposite sort of season, pretty rock-solid in the league but couldn’t grab either of the cups available.

And of course, it all culminated on the glorious evening of 10th May when, forced by the league and other circumstances to play both teams at the same time, the Reserves won the Cup 6-0 whilst at the same time the Under 21s won their league at Hassocks, a club that had already announced it was about to grab the title!

Well, that was that and this is now. We start it all again, so let’s go with the show! As a very, very famous American football coach Marv Levy of the Buffalo Bills once said: ‘Hey, where would you rather be?’