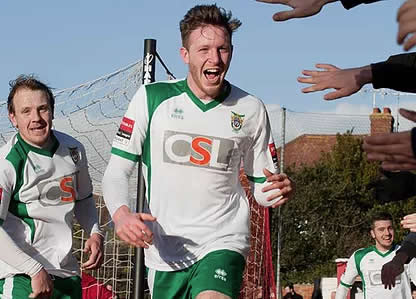 Jamie Howell has spoken of his frustration in his attempts to tempt new talent to join the Rocks and bolster Bognor’s bid to cement their place at the pinnacle of the Ryman Premier League.

Rocks host Billericay Town at Nyewood Lane tomorrow (Saturday, 3pm) and look to extend their run of three unbeaten games, the latest of which saw them snatch a 1-1 draw at rivals Worthing on January 2, helped by Jimmy Wild’s opener (captured above by Tommy McMillan).

Howell’s battle-weary troops have fought, scrapped and, above all, passed their way to the top of the table despite having to compete with clubs with much more money to spend on attracting players.

Clubs such as Havant & Waterlooville, for instance — a team who came to Bognor on Boxing Day in a match that resulted in a 1-1 draw.

The Hawks, managed by ex-Portsmouth ace Lee Bradbury, enticed one-time Rocks’ fans’ favourites Jason Prior and Alfie Rutherford to West Leigh Park in the summer after they dropped into the division following relegation from National League South last year.

And why not? Non-league players, much like the majority of their professional brethren, rarely have difficulty choosing lolly over a sense of loyalty, rightly or wrongly.

Prior, who once went on trial at Newcastle United, is a proven goalscorer — witness 153 goals in 210 games for the Rocks. Meanwhile, former Pompey youngster Rutherford is a supremely talented attacker who, it is said, would have been kept on at Fratton Park but for a small problem with his heart.

Yet there they are, those Rocks, sitting pretty at the summit; four points ahead off their Hampshire rivals, though Bradbury’s side have a game in hand. Needham Market, having played a game more, are sandwiched between the two in second spot — a point behind the team assembled by Howell and hugely influential No.2 Daryn Kilpatrick.

The consensus is that if Howell and Kilpatrick (ably assisted by Rocks grandee and former manager Jack Pearce) can lure two or three players to Nyewood Lane then the club can redouble their efforts to gain promotion. Chief amongst these targets is a striker.

Not that Howell doesn’t have time for current incumbent Jimmy Wild, an 18-year-old recruit from Southern Combination Premier League Chichester City. Faith is one thing, however; goals are another — Wild has found the net five times in the league so far this campaign. As our American cousins are keen on saying, ‘You do the math’.

Howell hasn’t had much choice other than to persevere with Wild, a forward who is still learning his craft and is doing so with admirable energy and enthusiasm and, no doubt, he is eager to add efficiency to his attributes.

“I’ve got so much time for Jimmy. He knows how we like to play and is a good lad — but he is 18 and still very much learning the game,” said Howell. “Of course, if we could attract a striker who can score 25 to 30 goals the benefit would be there for all to see.”

“But strikers who score goals are at a premium. If they are not already at league clubs they are at non-league clubs with healthy budgets. And we aren’t helped by our geography, asking a player to come down and play down in Bognor can prove a challenge.”

Howell says he is grateful of the level of support he and his team receive from the Green Army, the noisy, ultra-style group who create a great racket in support of their heroes and do so with a wit envied by rival fans, as well as a huge dollop of self-deprecating humour (and the brand of flowing, passing football which is easy on the eye obviously helps here).

The support is there, with healthy home attendances and a decent following on the road, too — and the brand of flowing, passing football, which is easy on the eye, obviously helps in this regard.

Howell is often reminded that Worthing hotshot Omar Bugiel, a lodger at his home, is just what the Rocks need. And he can even manage a smile amidst his frustration when he recounts a recent exchange with a supporter — even though it only served to highlight his exacerbation.

“I was at the garage near the Southdowns and a guy looked at me and said, ‘you’re the Bognor manager’. Yes, that’s right I said and he said, ‘What you need is a striker!”

“But he was only saying it in a positive way. It can be incredibly frustrating but we never stop trying to acquire players who will enhance our squad — believe me, we look every day. I thought we had one today but was told this morning that it was not to be. But we go again and if we can make an improvement, though it is proving difficulty, then it will freshen things up for us and we can go again.”

Bognor and those who represent them may not be rich in money terms, but they know the value of teamwork, hard graft and an unswerving ethos to play the game properly.

Can they stay the distance and gain promotion? Let’s hope so — as Ancient Roman poet Virgil wrote:

“Fortune sides with him who dares.”