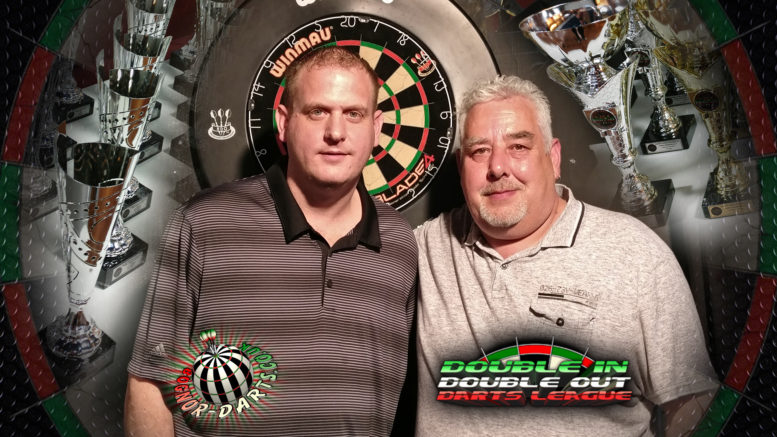 Arrows aces Gary Blackwood and Graham Clear were on target for success when they scooped the honours in the Double-In Double-out Darts league with a blind pairs knockout.

Some 56 players took part in the knockout, 4 short of the record, followed by the trophy presentation at the Newtown Social Club. The first few rounds saw a 112 in-shot from Ashley Clements (POW ‘B’), 100 in-shot from Lee Hellyer (Chi Snooker Club), and 100 in-shot and 125 out-shot from Gary Blackwood (Newtown Raiders).

The quarter-finals saw a 100 in-shot from Wayne Wadsworth (Claremont Samba’s) followed immediately by a 116 in-shot from Richard Pennells. Wadsworth and partner Pat O’Hara (Hunston Club) failed to win the game and left the knockout.

The first semi-final saw Pennells and Rachel Hall (POW ‘A’) take on Rhonda West (Newtown Raiders) and Andy Cooper (Cabin Cruisers). The first leg saw Pennells hit the winning double, the second saw Cooper take it to the last leg. Pennells started the last leg with a 108 in-shot, helping himself and Hall take the win 2-1 and the spot in the final.

The second semi-final saw Blackwood and partner Graham Clear (Hunston Club) against Adam Judd (Friary Arms) and Lee Chapman (Neptune). Blackwood started with a 120 in-shot and they won the leg. Judd hit a 100 in-shot in the second leg, but Blackwood hit another 120 in-shot. A ton each from Judd and Chapman still couldn’t get them past their opponents who took the win 2-0 and the second spot in the final.

The final saw Blackwood and Clear take on Pennells and Hall, with Blackwood winning the bull and going first. Blackwood scored the in-shot straight away with 80, and follow it with 85, while Clear hit 91 and 100. Hall eventually hit their in-shot, but they were too far behind to do anything. With 2 darts Blackwood hit double top to take the first leg after 20 darts.

The second leg saw both teams miss the first in-shot, but Blackwood and Hall started the game. Blackwood hit a 140 early in the leg, but Pennells replied with a ton, followed by 86 from Hall. Blackwood had 137 left, but missed double 10 for the win. Clear bust the finish that was left for him by hitting the wrong double, and Blackwood also bust the finish on his next throw.

This gave Hall a chance at double top, but she missed, giving Clear another chance, but he hit the wrong double again. Pennells then missed the double and left 20 for Hall. But before she had the chance Blackwood stepped up and hit double 5 with the second dart, taking the game and the match, making himself and Clear the Blind Pairs Champions, and taking home £100 between them.

Another great selection of trophies were supplied by Aford Awards (the new owners of C&M Trophies of Littlehampton) for the presentation.

The final league positions were: