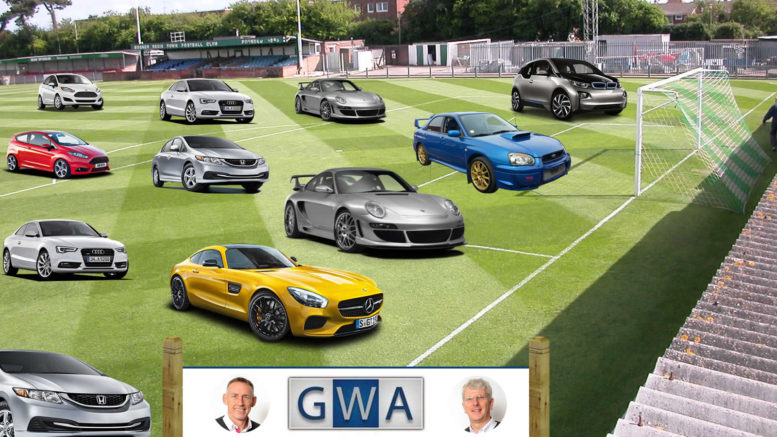 The Rocks believe they have secured the financial future of the club after agreeing a ground-breaking stadium naming rights sponsorship deal with the town’s leading car dealer.

But the agreement will see the hallowed Nyewood Lane turf ripped up to make way for a plastic pitch which will double up as a CAR PARK when the team aren’t playing!

Manager Jamie Howell has steered Bognor Regis Town to the brink of the Ryman Premier League title and promotion to the National League South.

And if they are promoted the team boss will need an increased budget to attract better players and pay bigger wages so the Rocks can compete at the next level.

That has prompted the club hierarchy to seek fresh investment; and they have succeeded but the new deal comes at a price. The tie-in with GWA Cars & Finance will see a state-of-the-art 4G synthetic pitch installed at Nyewood Lane – to be renamed the GWA Arena – which will double up as a car park for the motor company’s stock.

The Nye Camp pitch has long been the envy of other non-league clubs and the Rocks were reluctant to tear it up for a plastic pitch but agreed to the move for the long-term betterment of the club.

A spokesman explained: “It’s a sizeable financial package and one, frankly, we would have been daft not to go with. The GWA guys will have an office at the ground during the week and the pitch will be a showroom for their vehicles.

“In the summer this won’t pose too much of a problem; but obviously in the winter they will move the cars when we have home matches.”

He said: “I get the fact that fans will be upset at the prospect of the pitch being turned into a car park but you need to look at the big picture and the money on table will help fund a better squad for the club.”

Gary Watts added: “The synergy was obvious what with Gary having played for the Rocks, albeit not at his best most of the time. Overall we are delighted and look forward to a prosperous partnership.”

And Gary Young, who also played for Italian amateur outfit Floriaplo, said: “Being of a certain age there was ony ever going to be only way I would get back on to the pitch at Nyewood Lane so this makes perfect sense for all of us. I was an incredibly gifted footballer for the team and fully expect to be inducted into the club’s Hall of Fame. What do you mean they don’t have one?”

PS: Have you checked the date?