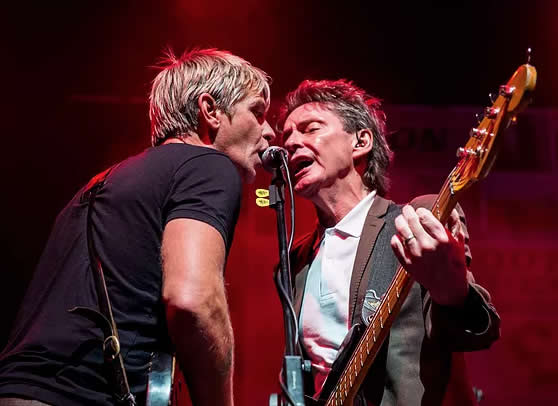 They say that life begins at forty and that is certainly the case for Bognor musician Russell Hastings. Little over a decade ago, he was playing local pubs and clubs with Maximum High and also preforming a tribute to Paul Weller.

A chance encounter with Rick Buckler, the drummer with Russell’s boyhood heroes The Jam, led to the pair forming ‘The Gift’ along with fellow Bognorian and Maximum High guitarist David Moore in 2005.

Two years later former Jam bass player Bruce Foxton also joined the band and with Moore switching to keyboards and second guitar, the quartet revived the sound of The Jam, who were one of the most iconic bands of the late 70s.

In 2009, Rick Buckler unexpectedly quit the and since then the band has effectively revolved around Foxton and Hastings, with a variety of bodies on the drum stool.

The pair are more than band mates as they have formed a close personal friendship and as well as touring, they have also recorded two albums of new material (Back In The Room) in 2012 and more recently, Smash The Clock.

Last Friday From The Jam played the London date of their autumn tour at The Clapham Grand, which has become a regular venue on the schedule and once again it was a sell out.

The appetiser came in the shape of The Chords UK (formerly known as The Chords) who were one of the key players in the late 70’s mod revival. They played a selection of old numbers including ‘British Way Of Life’ and ‘Get Me To Saturday Night’ and ‘Man On The Northern Line’ from their 2016 album Take On Life.

From The Jam took to the stage to an enthusiastic crowd and ripped into ‘This Is The Modern World’ the title track of The Jam’s second album from 1977.

This is the singles tour, with a selection of  both A&B sides from The Jam back catalogue, although not in chronological order, as is often the case when bands undertake singles tours.

The big hits were all included, ‘Down In The Tube Station At Midnight’, Strange Town, ‘Going Underground’ and one of the best songs ever written by Paul Weller ‘That’s Entertainment’.

‘Round And Round’ from the Stop The Clock album, also got an airing, as well as some of the classic ‘B’ sides ‘The Butterfly Collector’ and ‘Smithers Jones’

A four song encore included début single ‘In The City’ which many in the crowd had been calling for all night, before a barnstorming finale of ‘Eton Rifles’, the closing track on the Setting Sons album.

From The Jam go from strength to strength with an annual spring acoustic tour, summer festival dates and a full band autumn tour and not just in the UK, but around the world.

Having toured all the albums, the singles and with a greatest hits package under the banner of The Public Gets What The Public Wants, it will be interesting to see the theme for next year.

As for Russell Hastings, to earn a living touring the world and playing the songs which formed his teenage years, he continues to live the dream.

​Tune up! The Voice UK is coming to Bognor to find the next singing superstar