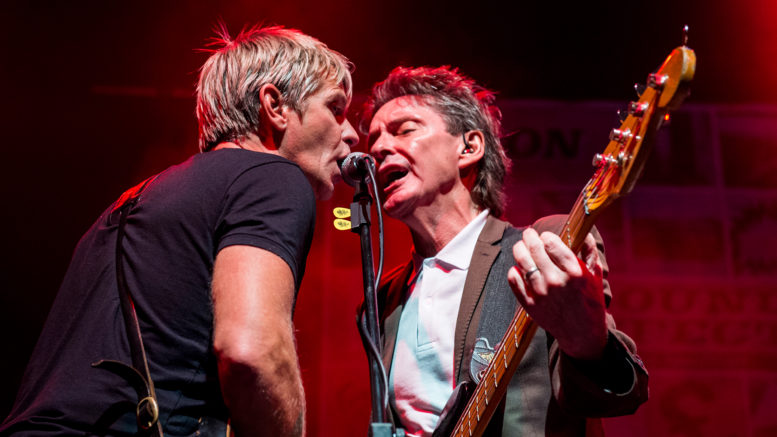 Russ Hastings has rubbed shoulders with the great and the good from the world of rock ‘n roll. He has fronted From The Jam for sold-out gigs all over the globe, from Australia to Aberdeen, and from Hong Kong to Hull. Yet the frontman has revealed that despite the privilege of playing before adulatory audiences all around the world, he still reserves a special place in his heart for his hometown of Bognor Regis.

Russell, who must be congratulated with birthday salutations as he turns 52 today (July 6), is a Bognor boy (he grew up in Rose Green and now lives in Middleton) who says he has never forgotten his roots. We spoke as he took some time out from touring to enjoy the fruits of his labour on his boat in Chichester harbour.

And the former Bognor comprehensive pupil reiterated just how important “coming home” was after touring with the band and alongside his very good friend, original The Jam guitarist Bruce Foxton. Russell has been working with Foxton since 2007 when he and Rick Buckler were touring with The Gift, formed in 2006.

Russ said: “Whenever ever we touch down in Heathrow from wherever we have been – be it Japan or the US –  and take the car journey back home, it always thrills me to come over the beautiful South Downs, and know I am not far from home.

“I live in Middleton now and love to walk on the beach there with the dog and be able to relax away from the often-hectic schedule which we have. Don’t get me wrong I feel incredibly privileged to be able to play in front of fans and bring them such iconic music but you do need some time to yourself.

“Touring can be a bit bonkers really so, bizarrely, it feels good to just go down B&Q for a tin of spray, or walk at Pagham Harbour just to keep things real.

“I came off Facebook a couple of years back because I just needed some privacy. Again, I am so lucky to have so many people who are interested in what we do and I genuinely thank them for their support. But now and again you need to recharge your batteries if you’ve been on the road, and kinda switch off.”

It’s been a busy few months for Russell and the band and the pace isn’t easing just yet. They play at the Corbridge festival in Northumbria this Saturday before a series of dates leading up to a packed schedule on The Gift 35th Anniversary Tour.

And Russell, a life-long fan and and historian of The Jam, so memorably fronted by the legendary Paul Weller, says that finishing off the year with two gigs in Brighton before coming home to Bognor for Christmas allows him time to reflect on the life he leads on stage.

He said: “Playing The Gift on tour with songs such as Town Called Malice is a great honour for me, and it brings back great memories for people 35 years down the line. It doesn’t matter if you are playing in Abu Dhabi, Sydney or Brighton; the songs have a particular relevance to each and every one of them with the memories they bring back.

“But if it is Brighton then I know that there is a real significance for us in that we are finishing up for the year and with that comes a certain relief. Some friends come over from Bognor and we have a big after-party and then we know there is time to rest up and reflect on the year that has gone by.”

Those who knew Russ back in the day, when partying and revelry were very much on his agenda in Bognor town centre, would have probably bet a year’s wages against the likelihood of him emerging as such a talented talisman able to deliver power-packed performances, and garner no lack of fame and respect as a result.

Russ added: “I was talking to a taxi driver the other day and asking him about the nightlife in Bognor now. I wouldn’t know too much about it to be honest these days; not like my day when we went into pubs such as the Coach and Horses, The Crown and The Bedford. They were good times. But I have to say, so are these!”