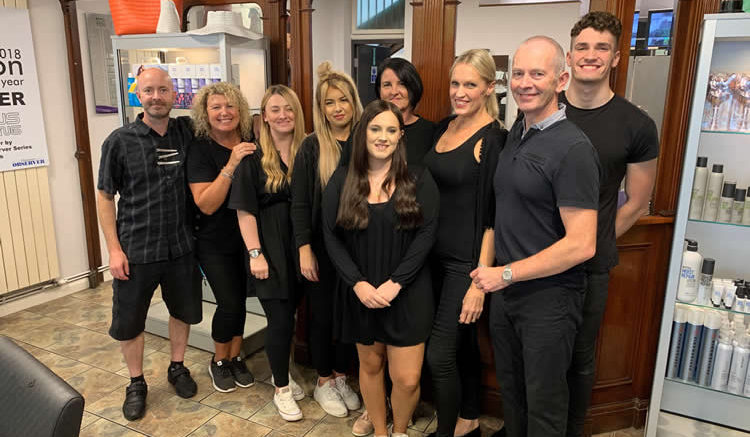 Award-winning stylist Daren Terry says he is delighted to be considered a bastion of business in Bognor Regis — as his popular Lotus Styling hair salon nears an astonishing 300,000 haircuts.

The magnificent milestone comes as Daren, along with business partner and wife, Kate, get ready to celebrate the 30th anniversary next month of opening the salon in the town.

Lotus Styling, which is in the town’s Aldwick Road, is the current holder of the Observer Salon of the Year award and, over the past three decades, have won many plaudits for business nous, commitment to the community and charitable work.

Indeed, husband-and-wife team Daren and Kate estimate that the charity fundraising work they have undertaken over the years has a total in the region of an incredible £30,000.

Daren, who has worked as a consultant for BRAUN in London and appeared at Salon international, has amassed an array of awards and recognition of supreme standards over the years — the latest of which includes being recognised as a Goldwell Master Colourist and a five-star recommendation in the Good Salon Guide.

Speaking about the aims and ambition of the business over the past 30 years, Daren said:

“Ultimately, we couldn’t have more pride in what we have achieved over the years. The goal was to create a hair salon with a vibe of London’s West End and we’ve been able to do that. The fact that we have so many loyal customers who come to us for the Lotus experience proves that. Our clients come here to relax, enjoy a convivial atmosphere and enjoy a great service — and at the end of it all their hair looks absolutely amazing, too! It’s more of a social event and that’s lovely.”

Another aspect of the business that is pleasing for both Daren and Kate is the excellent staff retention record. Kate explained:

“I think it’s testament to the ethos of the business that we have three staff members with incredible years of service — Keir 27 years, Louise 22 years and Nicky 13 years. In the modern age, that’s incredible and we’re so very proud to be able to reply on these fantastic people. We have a great team!”

Daren has been in the spotlight over the years for his wonderful hair creations as well as his artistic approach on all aspects of hair — and that includes the creative window displays so well loved by the townsfolk.

His GH Tree (a unique Christmas tree made out of GHD stylers) went viral on the internet. And he was in the media back in 2018 when he shaved England World Cup ace Harry Kane into the back of a client’s head then featured on Good Morning Britain with celebrities Piers Morgan and Susannah Reid. There have been many more newspaper stories besides.

As mentioned, charity fundraising has been key to the ethos at the business from day one when the salon was first opened in Argyle Road, Bognor Regis in 1989. The efforts, which include a hair-cutting session in a hot air balloon, have attracted rich praise over the years. Indeed, Daren is actually a world record holder thanks to his “26-hour cutathon” when he trimmed hair non-stop for 26 hours – with proceeds going to CRY, Clic Sargent and Chestnut Tree House.

“We’ve also helped the Bognor Regis Foodbank; Prostate Cancer UK, Breast Cancer Now and we are especially proud of being awarded top fundraiser of GHD Pink Campaign. And for the Little Princess Trust we were quoted by the charity as having donated the most amount of hair in the UK, with over 2000 inches of hair collected, providing wigs for children who have lost hair through cancer or other illnesses.”

Overall, quite a busy 30 years!