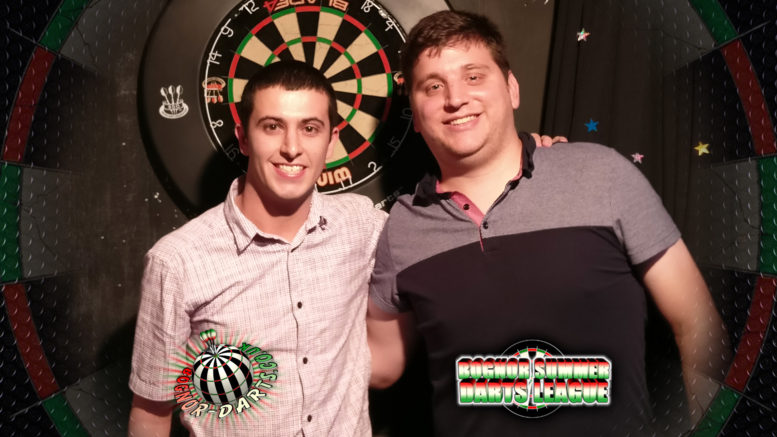 Osman won the battle of the Railway Club as the BRSA Jokers player defeated Mark H Todd, who represents BRSA Ravens, in the captains’ KO event.

And Blackwood (BRSA Wanderers) saw off the challenge of Simon Edwards (Richmond ‘B’) to land the secretaries’ KO title.

The captains knockout saw 14 players take part, and 15 took part in the secretaries knockout, both good turnouts, and both two short on the record.

The secretaries knockout saw a 180 in the first round from Alex Norgett (Newtown Amity). Norgett made the semi-finals where he met Edwards. Norgett tried hard, but Edwards showed his experience and took the first and third legs to make the final.

The second semi-final saw the champion of the last three years Lee Franklin (Friary ‘Z’) give it another go, trying to make it 4 on the trot, but he came up against Blackwood, who had swapped role for this year after winning the captains’ knockout last year.

Blackwood won the first leg, Franklin the second, but a 180 for Blackwood helped him take the win, taking out the three-time champ.

Blackwood started the final by winning the bullseye, but a 180 from Edwards helped him take the lead, and the first leg in 22 darts. The second leg saw Blackwood get into gear, starting with a 140, and following with a ton and two scores of 99. The second leg was won in 19 darts. 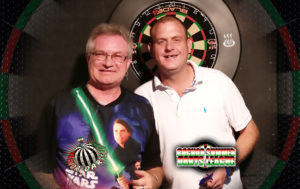 The last leg saw Blackwood start again with a big score, followed by 135 & 100. Meanwhile, Edwards lost form, and after only 17 darts the leg was won, taking the match, making Blackwood the Summer Secretaries Champion 2017.

The captains’ knockout saw 180s from  Todd and Osman, both in the second round. Todd took on Dave Bourne (Aldwick Legion) in the first semi-final, and another 180 from Todd helped him seal a 2-0 win to make the final.

The second semi-final saw Osman take on the reigning benevolent captains’ champion Stuart Gray (QE2 Galleon). Osman took the game to Gray, and took out the winter champ to make the final.

Todd won the bull to start the final with the first darts, but a few large scores from Osman saw him take the lead. Osman had first darts at the doubles but couldn’t hit them, neither could Todd. Osman then threw for double top, thinking he had missed it he went for double 10, missing them, too.

But on going to take his darts out of the board he realised that the double top was in. On showing the scorer that he should have called the leg as a win, it was given to Osman. The second leg saw Todd get the better start, and having a mighty lead he left himself double top.

But Osman had a few good scores to leave himself with 95, and with hitting the bullseye, then single 13, and then double 16, he took the leg, and the match win 2-0 to take the title.

Glory for Gary! Blackwood is knockout king after seeing off challenge from Clark