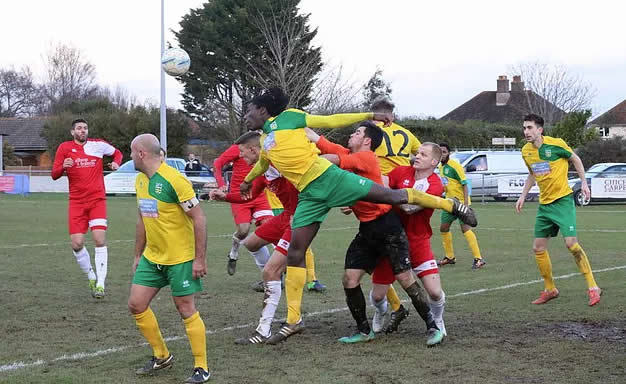 Jamie Howell will ask for more of the same of new striker Elijah Adebayo when table-topping Rocks bid to stretch their lead at the Ryman Premier League summit against Needham Market at Nyewood Lane on Tuesday.

On-loan Fulham hitman Adebayo grabbed a leveller and the man-of-the-match award in his league debut for Bognor yesterday to hand Howell’s men a point in a 1-1 draw with Enfield Town at home on Saturday,

Harvey Whyte provided the chance for Adebayo to strike the equaliser on 57 minutes after Ricky Gabriel gave the visitors a sixth-minute lead.

Howell will have been pleased with Adebayo’s display and his attitude to being with Rocks. And the Craven Cottage attacker, 18, on loan for a month, took to Twitter to say:

“Happy to have got my league debut for Bognor off with a goal and to get man of the match, on to Tuesday for another tough fixture.”

Meanwhile, Pagham moved up to fourth in the SCFL Premier with a 1-0 win at Newhaven. Influential midfielder Joe Shelley snatched a winner in the 88th minute to hand Mark Bennett’s Lions the win.

Now Pagham are gearing up for the visit of Brighton, who are set to field a development squad, to the Nyetimber Lane on Wednesday for a Sussex Senior Cup clash.

Nyetimber Pirates were edged out in a five-goal thriller at Sidlesham in the fifth round of the SCFA Intermediate Cup. The Looters, bossed by Charlie Welling for the game in the absence of holidaying manager Ted Griffin, went 3-0 down after Two goals from Callum Dowdell and one from Tom Bayley.

The visitors’ goals, from Michael Frangou and Danny Towers came too late to help them launch a rescue mission.

The defeat, captured above in Roger Smith’s picture  ends Pirates’ 21-game winning streak with the side’s last competitive defeat 294 days ago on the March 26, 2016.