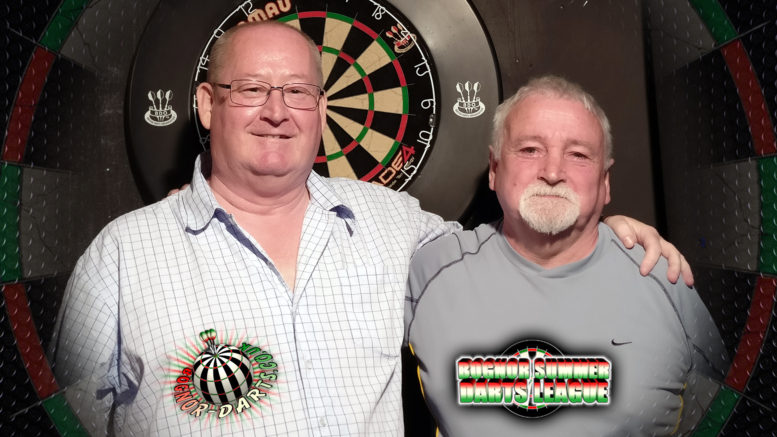 As the league took its match break, the first of the knockouts took place at the Newtown Social Club. Despite the Bank Holiday weekend, both knockouts saw excellent turnouts.

The Over 50s knockout saw 33 players take to the oche, seven more than last year, and only three short of the record. The first round saw the only 180 of the night come from three-time and reigning champion Andy Stubbs (Hunston Hares), but in round two Stubbs failed to retain his title for a hat-trick.

The first semi-final saw the 2010 champion Simon Edwards (Richmond ‘B’) take on Keith Robinson (Chi Snooker Club). Robinson made the final two years ago, and the semi-final last year, and both times lost out to Stubbs. But this year he made the final to face a new opponent. The second semi-final saw last years runner-up John Luff (Chi Snooker Club) against Andy Cooper (Squash Club). This year Luff couldn’t make it to the final, as Cooper played the better game.

Cooper saw off the leg to take the match to the third leg. Both players started the last leg with the same score of 60 & 100, but Robinson then hit a 140. Cooper finally hit another ton, but it was too late as Robinson only needed 56 and took just two darts to hit the double, eventually taking the title of Over 50’s Knockout Champion. 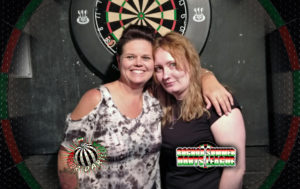 The ladies knockout saw 18 players take to the oche, equalled seven years ago, and only beaten once, way back in 2006.

The first semi-final saw Monica Roberts (Richmond ‘B’) take on Bridget Derwojed (Lamb Steyne). Roberts tried but it wasn’t her day, and Derwojed took the place in the final with a 2-0 win. The five-time & reigning Summer league champion Hayley Gatford (Hunston Hares) was drawn out in one of the two preliminary matches, and she made it all the way through to the second semi-final where she came up against the 2014 champion and the reigning Benevolent league Ladies champion Emma Bist (Aldingbourne Mavericks).

Bist played well and took the first leg, but Gatford pick up her game to take the second leg. The third leg saw Bist push into the lead, but a few missed doubles gave Gatford a shot, which she took, to get to her 7th final.

The final saw Derwojed go first after winning the bullseye, and she started with a score of 95. Gatford followed with her own 95, but smaller scores allowed Derwojed to get a good lead. Gatford almost caught up, but Derwojed only needed two darts to hit the double for the first leg. The second leg saw a ton and 95 from Gatford, but a few good scores at the end of the leg from Derwojed brought the game back to an even score and both players with scores of 62 left. Gatford went first but it went wrong for her, leaving Derwojed with a chance.

She threw the first dart high, hitting a 6, but then hit single 16 and then double-top to take the leg, the game win, and the Summer Ladies Knockout Champion title in her first ever final.