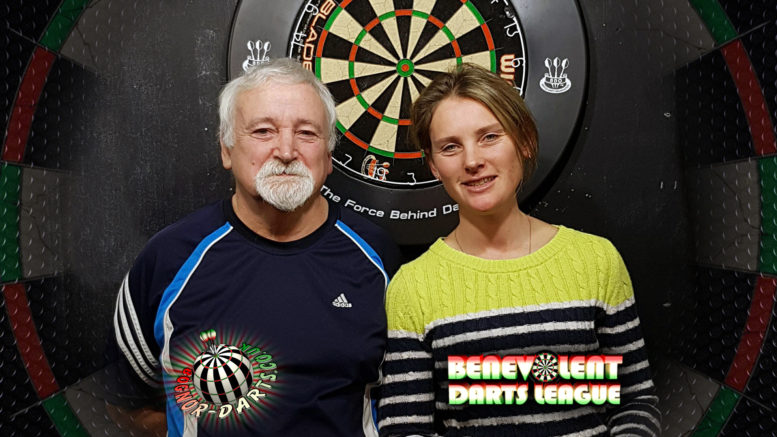 They enjoyed a victory over mother and son Bridget Scott-Ragless and Richard Ragless (Friary ‘Z’) as the first half of this season approached its end with the Sandy Carter Memorial mixed pairs knockout at the Newtown Social Club.

Some 31 pairs turned up to compete — an excellent turnout and only the fourth time more than 30 pairs took part. The two-time and reigning champions, Janet Grinstead and Gary Blackwood (the Legends), were knocked out in the second round by the two-time summer league champions, Debbie and Ashley Clements (the Hoff).

And the champions from two years ago, Mazz Tupper and Keith Robinson (Chi Snooker Club), were also knocked out in the second round.

The first semi-final saw Karen Wilson (Richmond Rebels) and Adam Hall (Aldingbourne Mavericks), who took out the reigning summer league mixed pairs champions in the first round, take on the Coopers.

They took the first leg, but Wilson hit the double for the second leg. The last leg was close, but Andy Cooper hit the double to take the spot in the final.

The Ragless duo took the first leg, due to misses from Bist and Hackett, but they managed to get the double in the second leg to make it one all. The last leg went to the doubles, but Richard Ragless found luck and hit the double to take the spot in the final.

The final saw the Ragless pair go first by winning the bullseye, but a score of 132 from Jody Cooper saw them take the early lead. Getting to the double first allowed Andy Cooper to take only one dart to hit double 16 and take the leg.

The second leg saw a ton from Richard Ragless, but three scores of 80 plus from the Coopers saw the in the lead again. Bridget Scott-Ragless had left her son with 98, but he missed double 12 for the leg.

With the Coopers on 22, it was up to Andy Cooper again, and he did the same as the first leg, only needing one dart to hit the double, taking the match 2-0, and the title of the Sandy Carter Memorial Mixed Pairs Champions.

Darts aces at the double! Kidd and Hackett taste success in Bognor league