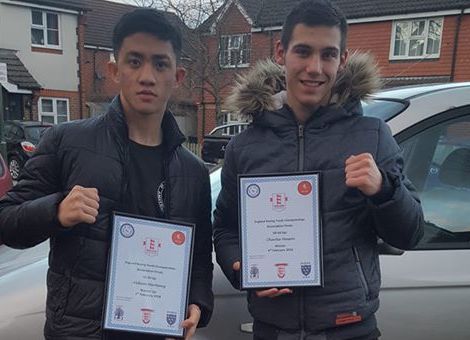 Bognor boxer Charley Mason is in bullish mood as he prepares for a huge bout after enjoying success in the Southern Counties England Boxing Youth championship final.

Felpham Community College student Charley, 16, won his fight at the weekend to set up a trip to Yorkshire where he is bidding for victory in a quarter-final fight to progress in the event.

He took to Facebook to explain: “Me and team mate Aldine Martinez both made it through to the Southern Counties England Boxing youth championship final. I boxed against the Surrey champion and won a close hard-fought contest, the cleaner shots coming from me.

“This takes me and my dad up to Doncaster in two weeks to the next and final stage. I will be boxing on the Friday in the quarter finals. If I win that, I will box again in the semis on Saturday and finally in the final on Sunday. No walk in the park at this stage as all these coming bouts are between the best boys in England. I know if I’m on form I can do it! All I can say right now is, ‘bring it on!’

“My mate Aldine wasn’t so fortunate, however he performed out of his skin. His job was a harder one than mine since his opponent was pretty much four times more experienced than him.

“On top of that his opponent has hardly ever lost. Despite this Aldine started confident and boxed beautifully. He won the first round easily, drawing his opponents lead and countering accurately with power.

“It’s fair to say the other corner were worried and the boxer frustrated. Aldine began to fade in the second and I would say that going into the third it was one a piece. The far more experienced opposition came out hard in the third and Aldine was near exhausted. Aldine took a standing eight count.

“Shortly after that just as the referee was about to begin the second standing 8 count, dad and coach Adey threw in the towel to stop unnecessary punishment. Aldine was praised by many for an outstanding performance.

“His opponent’s dad-coach commented that in the month since Aldine moved to our club (Bognor ABC) he has improved beyond recognition. Aldine is a huge prospect for the future that’s for sure. Well done Aldine.”