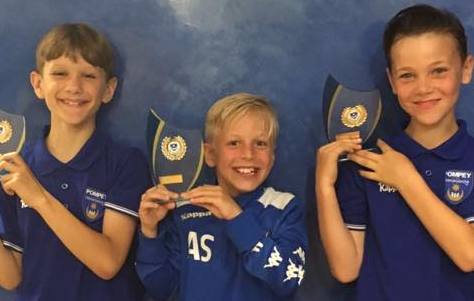 New Pompey manager Kenny Jackett no doubt had has his eyes on some potential stars of the future when he dished out the medals at a recent presentation night.

And a couple of budding youngsters from Bognor Regis were the recipients of awards after a successful season playing for the Pompey in the Community under-9 team.

Albie Scott and Lennie Smith, both of whom also play their regular football for Felpham Colts, represent the young Blues in Junior Premier League matches and were delighted to be part of the ceremony and meet the manager at the Fratton Park bash. 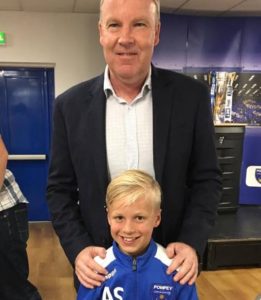 Jackett, who replaced Paul Cook in the summer and who will steer Portsmouth through their forthcoming League One campaign, was on hand to congratulate the youngsters at the end-of-season affair.

Proud dad Nick Scott said: “It was heartening to see the manager take time to give the lads a big boost. They have a marvellous season and were are proud of all of their achievements.”

“Another local lad, Liam Murphy, also plays in the team, all the others are Portsmouth-based so it’s nice to see representatives from Bognor turning out for Pompey given the stiff competition.”

Rocks romp! Bognor stay top of the table after 3-0 victory