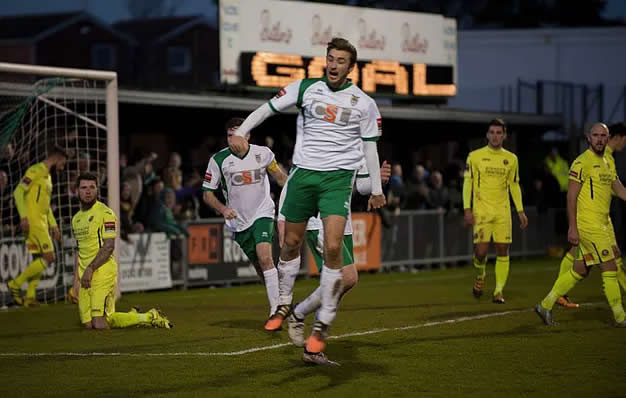 Ed Sanders snatched the goal that kept Bognor second in the table ahead of opponents Havant & Waterlooville after a 1-1 draw in the Ryman Premier League on Boxing Day.

Havant included former Rocks favourites Jason Prior and Alfie Rutherford in their team — summer signings from the Rocks — and both flopped on their return to Nyewood Lane following their move to the Hants outfit for bigger wages.

Sanders squared things up on 62 minutes in front of a bumper gate of 1,348 after the big-spending Hawks had taken a first-half lead. The point gained means Jamie Howell’s men retain second spot in the division and look to chase down leaders Needham Market when they travel to Met Police on Saturday.

Needham are three points ahead of the Rocks but the Nyewood Lane side have two games in hand. Havant are two points behind Bognor with a game in hand.

Rocks are next in action on Saturday when they travel to Met Police for a 1pm kick-off, then go to local rivals Worthing on Monday, again with a 1pm kick-off.