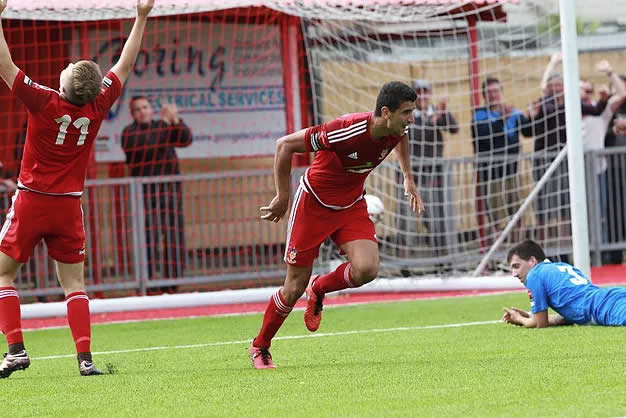 Jamie Howell might want to consider evicting his lodger after he denied Rocks a win with a goal to make it 1-1 in Bognor’s game at Worthing today.

Jimmy Wild hit a first-half goal to give the visitors the lead in this Ryman Premier League derby clash at Woodside Road but Omar Bugiel levelled for the Rebels.

And things might be awkward in the Howell household tonight because Bugiel shares the Howell family home!

At the very least, Howell might try to talk him round to signing for Rocks, desperate as they are for a new striker to give them an alternative to Wild, a player who is doing well to punch above his weight but yet still the unfinished article despite his potential.

The draw means Howell’s Bognor side stay top of the league after gaining a point and benefitting from their title rivals dropping points.

Needham Market, sitting in second spot, were hammered 5-1 at Leiston, while third place Havant could only manage a 1-1 draw at home to Wingate & Finchley.

Rocks are next in action when they host Billericay Town on Saturday (Jan 7 )in the RPL.

Meanwhile, Pagham lost ground in the race for the SCFL when they could only grab a point with a 2-2 draw at home to Wick.