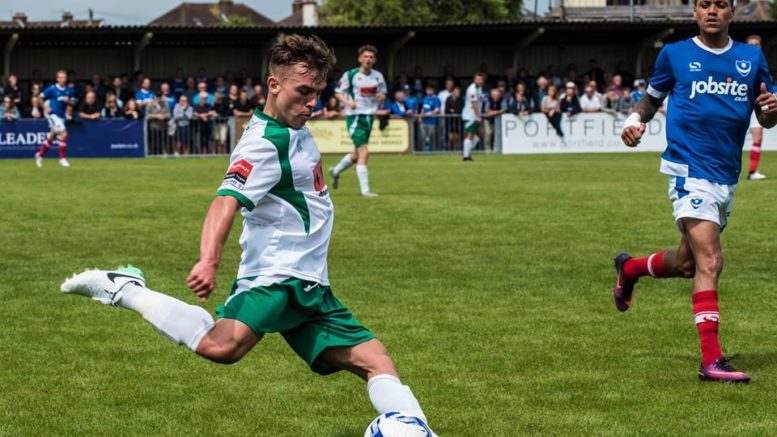 Rocks defender Calvin Davies is on the brink of a dream move to Championship outfit Bristol City, we can reveal.

Full-back Davies, 19, enjoyed some game time for Bognor in a 2-0 pre-season friendly defeat against his former club Pompey at Nyewood Lane yesterday.

And it could be his last appearance for the Rocks, where he made 22 appearances last season on-loan from Fratton Park, with the Robins keen on taking a closer look at the right-back.

Davies will jet to Scotland on Tuesday with City’s U23s, managed by Luke Williams, for two friendly matches in Edinburgh.

He was on League Two Yeovil Town’s radar but interest cooled. Now he can rekindle his hopes of making it in the pro ranks. He said: “I fly to Scotland with Bristol City on Tuesday and I am really looking forward to hit. I need to work hard and show what I can do.”

Life-long Pompey fan Davies came on in the second half of the annual friendly against Pompey, who won with a brace from new striker Brett Pitman in front of around 1,800 fans. The ex-Ipswich goal-getter struck once in each half but, overall, the home side acquitted themselves admirably.

Another player who may have made his final appearance for the Rocks is Dan Lincoln. The former Reading keeper pulled off a couple of fine saves to show why he is attracting interest from bigger clubs. For now, though, his situation remains unclear.

Meanwhile, ref Gary Parsons irked Bognor boss Jack Pearce in the second half when he refused to allow Rocks to make rolling substitutions during the second half because it “was against FIFA rules”.

On, off…ON again! Rocks WILL host Pompey as Pearce replaces El-Abd to take charge for friendly