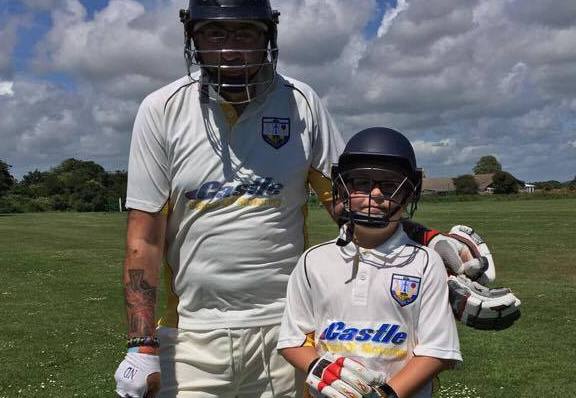 Schoolboy Finley became the youngest player to play in the men’s game for Aldwick 2XI in the West Sussex Invitational League against Barns Green on Saturday (July 15).

Finley’s fine batting skills during practice earned him a place in the team and he didn’t disappoint in the match, which the hosts, from the village near Horsham, won.

But so bowled over by Finley, who attends Rose Green Junior School, were the home side they awarded him the match ball at the end of the encounter. The gesture added to an amazing day for Finley and proud dad Dion, who said: “Everyone at the club loves his spirit and the enthusiasm he brings to the team. See him in action below:

“He only picked up a bat last season at winter nets and has improved with the help of everyone at Aldwick CC showing him the basics of cricket and how to play the ball on the floor.

“There was no win on the day, unfortunately, but I am a very proud father, pleased for him and grateful for the club and committee for pushing it to the league.

“Full credit must go to Aldwick CC, where Ian Guppy and Jim Smith helped enormously to for make this happen as well as the West Sussex invitational league for ‘okaying’ it. And thanks, too, to Rose Green school head teacher Mr Craig, who has been teaching him cricket there.

Fellow cricketer Dion says his son was given no easy time just because of his age. He added: “They bowled normally at him. The opposition were so impressed they presented him with the match ball as a memento.”