Rocks supremo Jack Pearce has ruled out the appointment of Darin Kilpatrick as the new manager of Bognor after the shock departure of Jamie Howell.

Howell, 40, chose to quit the Rocks to move to Eastbourne Borough just two days after helping the club secure promotion to the National League South from the Ryman Premier League.

Bognor finished second to champions Havant & Waterlooville and had to see off Dulwich Hamlet in a play-off final with a 2-1 victory in front of more than 3,000 Nyewood Lane fans.

But little more than 48 hours later Howell has left. It is understood that he was offered a pay hike by the East Sussex side which Bognor couldn’t match.

Howell’s departure, which comes after a long association with the club, including the last five years as manager, means Pearce must recruit a boss over the summer with an eye on the new campaign.

But highly-respected Kilpatrick, a successful manager with England Colleges, will retain his position as head coach and not step up to the bigger role.

Pearce said of Howell’s exit: “We are all sorry to see him go and we thank him for his service as a player, coach and manager, and we wish him well for the future.

“Bognor supporters will obviously be disappointed but they must understand that we have a model at this club to achieve the success we can with the limited financial resources we have available, allied to our geographical location. 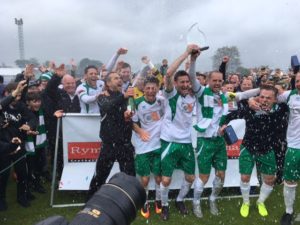 “The model introduces young managers and players, mixed with some experienced players. That being the case, other clubs can identify the talent we have and choose to invest in it to a financial level that we we as a club can’t compete.

“I can assure supporters the club will have all of its support staff, including Dabba as coach, in place for next season. And that we will not be rushing into making a decision on a new manager.

“We will spend time now securing the services of the players we have ahead of next season.”