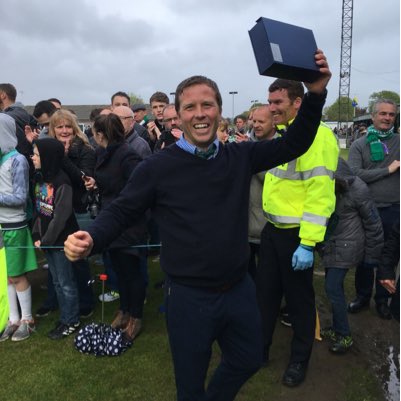 Jamie Howell has dropped a bombshell on newly-promoted Bognor by quitting to join Eastbourne Borough.

Just two days after Howell, 40, steered the Rocks to promotion from the Ryman Premier League to the National South division, he walked away from Nyewood Lane to move to the East Sussex side.

Former Arsenal youth team player Howell said: “Having spent 20 years at Bognor Regis Town as a player and a manager I felt it was time for another chapter in my career and I am very grateful to Bognor and wish them well in the future.”

Eastbourne Borough, who are already in the National South League and who will face the Rocks next season, says they had no doubts about pointing Howell.

A statement reads: “The decision to appoint Jamie was unanimous. He has been known to the club for several years – as his record and reputation at Bognor Regis Town has continued to grow and impress.

“The Rocks’ performances on the pitch – and in the rare occasions Boro have met his sides – have been excellent with a well deserved reputation for attractive, attacking football; all produced with a range of generally local players.”

Howell, who replaces Tommy Widdrington, added:  “I am delighted and honoured to be given the opportunity to manage at Eastbourne Borough. The club has been left with an excellent platform for me to work with and I cannot wait to start the process to bring success to Priory Lane.

“My role will encompass the first team and overseeing the Academy structure as I want us to be known for playing attractive and winning football with a nucleus of players coming thorough our Academy.”