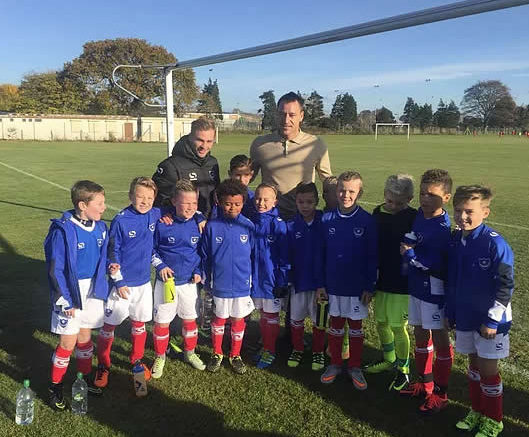 BUDDING soccer starlets Finley Cox and Marley Rishman had to rub their eyes with disbelief when Chelsea star John Terry turned up to give them some tips at the weekend.

The youngsters were formerly star players with Felpham Colts but have signed for Pompey U9s this season and the former England defender and Blues ace Terry was on hand to watch their game.

And the lads were in fine form and won their match and the sight of such a big name from football gave the team something extra to smile about.

For the record,Pompey U13s won 3-2 against Orient, who featured JT’s nephew in this game. And the U9s beat their London counterparts 7-3.

“John was a lovely bloke and really nice to the boys. Hopefully some of them can go on and achieve good things in the game, too.”

“For years my old Chelsea-supporting mate Keith Hardwell has told me what a nice chap John is and, I have to admit as a Red, I didn’t believe him, But fair is fair, John is a really nice guy.”