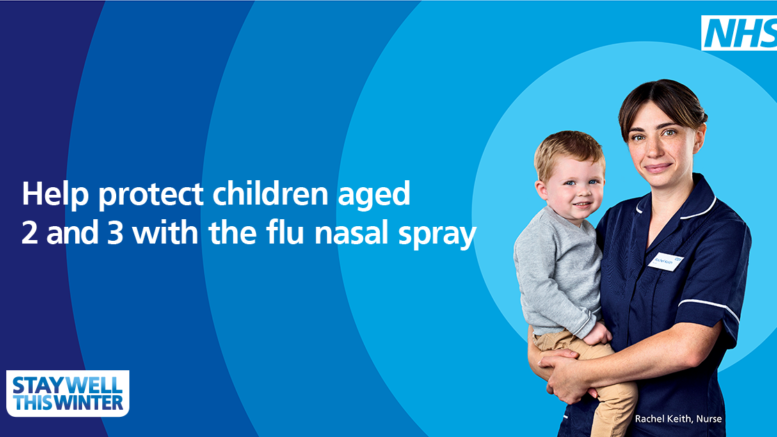 Families In Bognor Regis are being urged to make sure their children are vaccinated before the winter flu season begins.

Last year more than half of the country’s kids between two and four were left unprotected from the serious effects of the winter illness.

And for the first time this year children in school year four, along with children aged four and over in school years reception, one, two and three, can get their free flu vaccination, in the form of a nasal spray, in school.

Children aged two-three are also offered the nasal spray vaccine, and can receive it at their local GP surgery, usually by the practice nurse, along with children who are four provided they were three on 31 August 2017.

those children who are home-educated will also be offered the vaccine, provided they are in an eligible school age group. Young children are particularly vulnerable to flu and are most likely to spread flu to others. Vaccinating them is said to be one of the best ways to protect them and the wider community against flu.

Flu and complications associated with it cause 8,000 deaths on average a year in England. Around 6,000 of these are people with heart and lung disease.

Dr Katie Armstrong, GP, says more three out of four people with flu have no symptoms but can still pass it on, and children are one of the biggest groups that pass bugs like flu around, especially at this time of year.

The clinical chief for NHS West Sussex added: “By getting your child vaccinated you are making sure they are protected this winter, helping to protect your family, but not only that, you are also helping to protect the whole community.

“You can make a real difference in helping to stop the spread of flu by saying yes to the vaccination if your child is eligible and encouraging friends and family to do the same.”

Alison Young, an NHS infection control nurse says she is keen to see as many young people to get protected as possible this winter, adding: “Not only will it protect them, but it will also protect those around them – family, neighbours, people in the supermarket – the list can go on.

“The vaccine is given as a single spray squirted up each nostril. Not only is it needle-free – a big advantage for children – the nasal spray is quick and painless. Please say yes when your child’s school asks you and make sure they are protected this winter.”