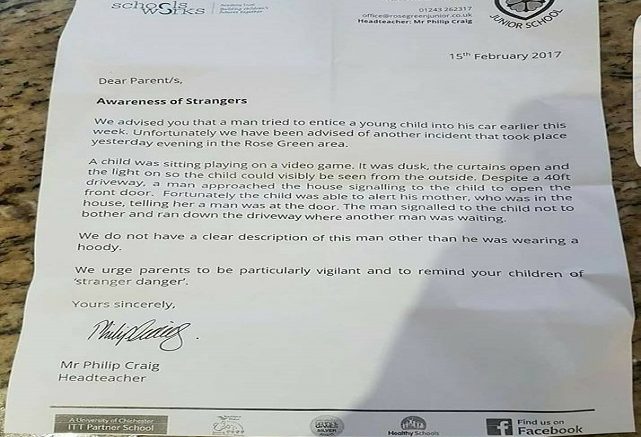 Parents in Bognor Regis have been warned to be on extra vigilant after a second “stranger danger” alert in which a man tried to lure a youngster from a house.

It comes after a man was said to have tried to persuade a child to get into his car in Rose Green earlier in the week.

Now the head teacher of Rose Green Junior School, Phillip Craig, has sent parents a letter (dated February 15) to warn them of the incidents and asking them to be on guard and to redouble their efforts when educating children to the potential perils of strangers.

In the letter, Mr Craig says: “We advised you that a man tried to entice a young child into his car earlier in this week. Unfortunately we have been advised of another incident that took place yesterday evening in the Rose Green area.

“A child was sitting playing on a video game. It was dusk, the curtains open and the light on so the child could visibly be seen from the outside.

“Despite a 40ft driveway, a man approached the house signalling to the child to open the front door. Fortunately the child was able to alert his mother, who was in the house, telling her a man was at the door.

“The man signalled to the child not to bother and ran down the driveway where another man was waiting. We do not have a clear description of this man other than he was wearing a hoody.

“We urge parents to be particularly vigilant and to remind your children of ‘stranger danger’.”