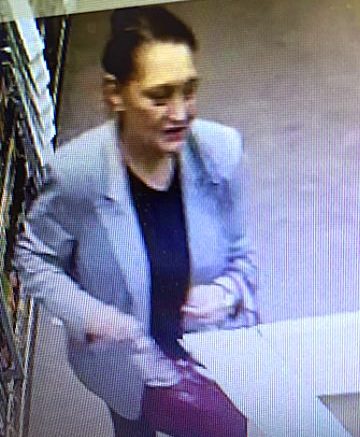 A woman told a shop workers her puppy had died and scammed £250. Now police are asking the public to help identify a suspect who they want to speak to in connection with fraud and shoplifting offences.

The woman went to Marks and Spencer and Pets at Home in Arun Retail Park, Bognor, where it is believed she duped shop workers out of nearly £250 and stole over £50 worth of alcohol.

At around 5pm on 15 May the suspect entered Pets at Home and began to pick up items off of the shelves before heading over to the till. She then told the cashier that her puppy had died and that she needed to return these items. The staff member consoled the woman and refunded her a total of £130. The suspect then left the store and was seen getting into the passenger seat of a grey or blue vehicle which drove away.

A short time later police received a call from Marks and Spencer reporting that a woman had been in the store and spun a story about some flowers she had ordered and that she wanted a refund. When the shop assistant left the customer service desk to fetch the manager the woman loaded her bag with over £52 worth of alcohol. After a discussion with the manager she was given £117 refund.

The woman said to be responsible for both offences is described as white, 5′ 8″, aged between 40 and 50 years and with dark brown hair in a ponytail. She was wearing dark trousers, a grey blazer and black shoes.

PC Russ Watson said: “We are asking anyone who recognises the woman in the CCTV images to contact police online or call 101 quoting serial 1121 of 15/05. Alternatively you can contact the independent charity Crimestoppers anonymously on 0800 555 111.”