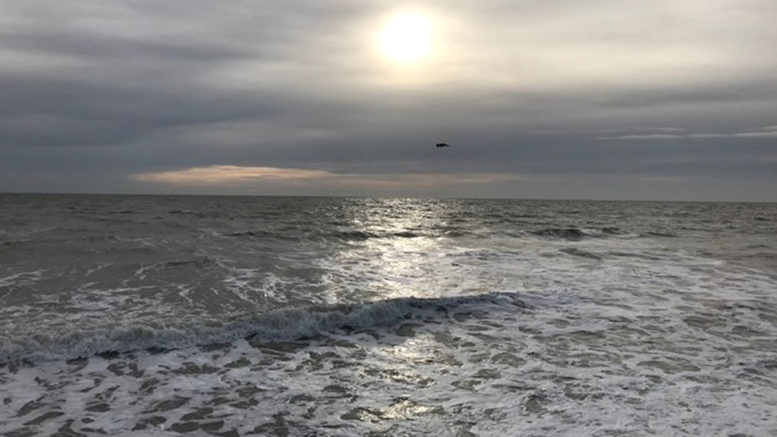 For a good few years now, admirers of the seascape at Bognor Regis have been able to go on line and satisfy their need to view the ever-changing scene from the sunniest spot in the UK.

The beach camera at the town, which gets more sun hours than anywhere else in the land, is placed on the pier and looks east towards the Butlins end of the resort.

it is viewed by those frustratingly stuck in offices around the area who want to absorb just what they are missing down on the beach as well as ex-pats who have moved away from the area – in land in the UK or to countries such as Canada, Australia and beyond — and still harbour nostalgic hankerings to view their former stomping ground.

Nothing much happens, in all fairness, other than, you guessed it; the tide comes in and, yep, goes out again. Now though there is a development. Not an earth-shattering one such as buried treasure dug up opposite the Regis Centre, or an illicit cargo of washed up cocaine at Dark Lane. No this is far more exciting. For now, we have the option of looking west! That’s right. The new webcam which has been christened “west cam” will, just like its partner, stream live 24/7 to promote Bognor Regis across the world.

An announcement on social media platform Facebook declares: “Introducing WestCam a long time in the organising, planning, and permission to make it happen, Bognor Regis now has a west-facing webcam. Sponsored by Jim Brooks with support from The Pier owner, the new WestCam is managed by Colin Clark and Clive Mott to complement the east facing webcam.”

The new webcam development has been met with delight by keen beach-watchers. Allie Cheetham, from Aldwick, says she often logs on to the stream to see what’s happening on the coastline.

She said: “Living by the sea is a gift — I’ve always been quick to say that, it’s why we live here after all — and one which I don’t ever take for granted. But sometimes life is so busy that I simply can’t get down to the beach, which is a huge shame. But, instead, if I am working from home I can tune in to the view from the camera on the pier and to see the view east can be inspiring. Very often going to the beach the next day becomes an imperative.

“Now we can look westwards it is amazing. You have that wonderful view of Pagham Harbour going along and towards east beach at Selsey. The sunsets there can be fantastic. I shall be looking forward to viewing them when I can’t actually make it down to the beach.”