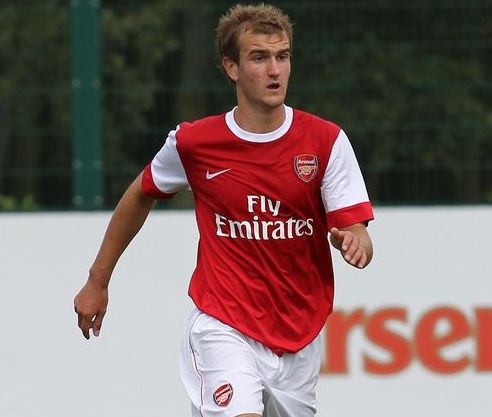 Jamie Edge had the footballing world at his feet when he was snapped up as a teen starlet for a six-figure transfer fee by Premier League Arsenal.

Arsene Wenger splashed out £180,000 on the central midfielder when he was 15 after a Gunners scout recommended him following several dazzling displays representing Cheltenham Town youth.

But things didn’t pan out for the talented schemer at London’s biggest club and he joined West Brom before he dropped into non-league football.

So instead of earning rave reviews alongside players such as Aaron Ramsey and Mesut Ozil, Edge — who started this season with Hereford — will find himself at the Nye Camp tomorrow, wearing the colours of his new club, Gloucester City.

The Tigers, who are 13th in the standings, are the visitors to the home of Bognor where he will do battle with Rocks aces such as Doug Tuck and Dan Beck. Jack Pearce’s men will look to build on their FA Cup victory over Weston-Super-Mare (another former club for whom Edge played) to improve their league standing of 18th in the table.

They will do so, as expected, without versatile Gary Charman, who has confirmed he has left the Rocks permanently. This follows a month loan spell at Eastbourne Borough under former, and now current once more, boss Jamie Howell.

Charman took to Twitter this week to confirm he had joined Boro, saying: “I would just like to say a huge thank the Rocks fans, I have now left the club due to my service not being required anymore.

“Looking forward to helping Eastbourne make the play-offs. One thing is for sure your always get 100 per cent from me. Pleased to be apart of the team.”

Charman will be reacquainted with his former team-mates next Saturday (September 30) when Bognor go to Eastbourne in the Third Qualifying Round of the FA Cup.