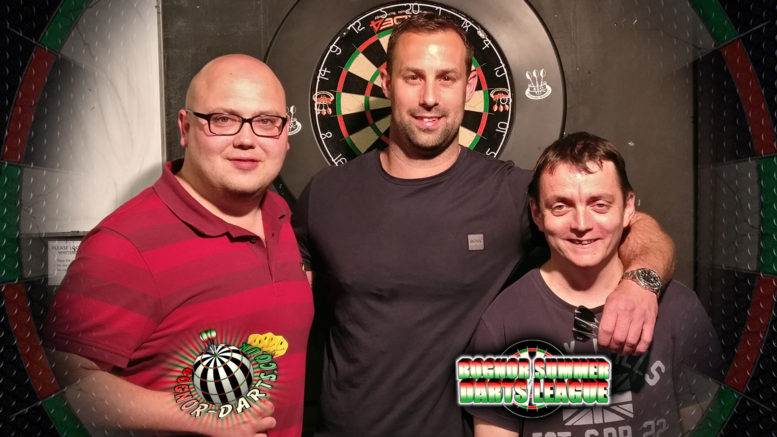 The trio proved worthy winners on a night of divisional trebles knockout, which took place at the Newtown Social Club with a record turnout of 34 teams overall

The Richmond trio smashed their opponents in the previous round, but they could only manage the second leg against the Royal Oak who took the place in the final. The second semi-final saw Joe Osman, Natasha Hughes-Thomas and Aston Seabridge (BRSA Jokers) against the family team of Steve, Dan and Jamie Middleton (Newtown ‘C’). The family team tried hard, taking the second leg, but a 105 out-shot from Seabridge sealed the win in leg 3 to get to the final. 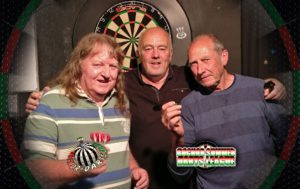 The Division 3 final saw the Royal Oak start first and although they took the lead in the leg, with a score of 156 from Grainger, they couldn’t hit their doubles, giving the Jokers a shot which Osman took using 2 darts at 48. The second leg saw tons from Osman and Seabridge for the Jokers, and from Mullinger of the Royal Oak.

This time the Jokers missed their doubles, and with 108 on the board, Coupland stepped up and hit treble 20, single 8 and double top for the second leg. The last leg saw the Jokers get the lead with another ton from Osman, but their doubles deserted them, giving the Royal Oak a chance which they took, taking the Division 3 trebles champions title.

Division 2 saw 11 teams take part, another divisional record. One match in the preliminary round saw team mates play each other, and a surprise with the top player from the division going out with his team mates.

The first semi-final saw Ashley Clements, Richard Pennells and Don Miles (QE2 Galleon) against Mark R Todd, Mary-Jane Todd and Brad Holley (BRSA Ravens). A spirited effort from the Ravens, but Clements, Pennells & Miles made it to the final.

The second semi-final saw James Riggs, Karl Wingate and Dave Wingate (Friary ‘D’) take on two team mates of Steve Jones and Karen De St Croix and their partner Janet Grinstead (BRSA Wanderers), who stepped in to make a team. The mixed team took the first leg, but Riggs and the Wingates pulled it back to win the last two, taking the spot in the final. 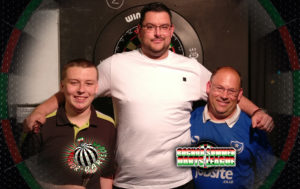 The Division 2 final saw the QE2 Galleon win nearest the bull to go first, and they got off to a smooth start with the more consistent scores. They allowed the Friary boys to close the gap, but Clements eventually hit double 7 for the leg. Leg 2 saw a spirited effort from the Friary with the lowest score being 66, and tons from father and son Dave and Karl Wingate.

This left their team captain with 52 after 15 darts, and he saw off the leg on only his second throw. The last leg saw a drop in form, but the Friary still took the lead with Riggs taking the double again, and the Division 2 trebles champions title.

Division 1 saw 9 teams step up, the same as the last 2 years, and only 1 team short of the record.

The first round saw the only 180 from Richard Ragless (Squash Club). Ragless and his team mates Derrick Longhurst and Buster Barton are the reigning champions, and they found themselves up against Lewis Campling, Alex Norgett and Lee Hellyer (Newtown Amity) in the first semi-final. The Squash Club won the first leg, with the Newtown taking the second.

But the reigning champions gave themselves a chance to retain their title by taking the last leg. The second semi-final saw Tony Phillips, Hayley Gatford (Hunston Hares) and Rob Tite (Newtown Amity) take on Lee Franklin, Micky Rowland & Dave Owens (Friary ‘Z’). With 3 of the top players in the league, it was almost easy for the Z’s to take the win with a 2-0 result, and the place in the final.

The Division 1 final started with Ragless winning the bullseye for first darts, but the Z’s took the leg in 18 darts after a 140 from Rowland, 95 from Owens, and an 82 out-shot from Franklin. Leg 2 saw tons from Ragless & Barton, and a 95 from Longhurst, but they still trailed the Z’s by a small amount. Owens missed the double for the win, as did Franklin by throwing too high and hitting the wrong double, but Rowland only needed 1 dart to hit double 8, taking the match 2-0, and the Division 1 trebles champions title.

A whole lot of treble! Wayne, Rob and Billy prove to be a knockout as they lift darts title