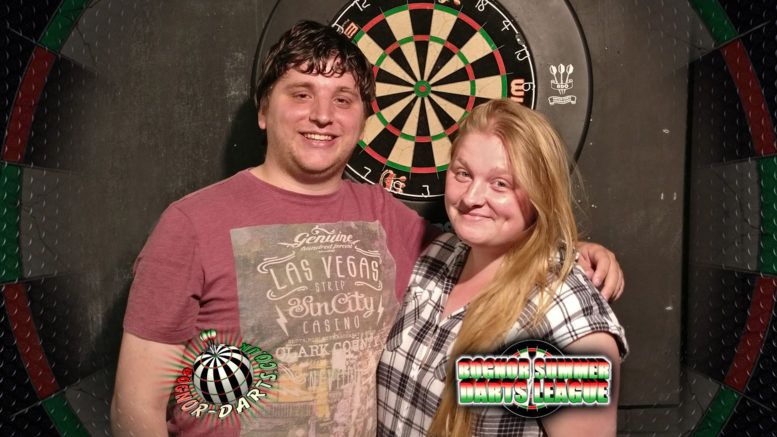 The brother and sister, representing Bognor Ravens, walked off with the honours following a super night of action at the Newtown Social Club; with a great turnout with 33 teams, 11 more than last year, and a record for the summer league. This was also only one pair short of the winter league record.

The first round also saw the two-time and reigning Benevolent Mixed Pairs champions Janet Grinstead and Gary Blackwood (BRSA Wanderers) get knocked out by the siblings . The reigning Summer league champions, Paula Duckett (Aldingbourne Mavericks) and Dave Owens (Friary ‘Z’) made it through the first two rounds, but lost to the mother and son pairing of Bridget and Richard Scott-Ragless (Squash Club) in the quarter-finals.

The first semi-final saw Mazz Tupper & Keith Robinson (Chi Snooker Club) take on the Ragless duo. The Ragless pair just about won the first leg, but a ton and a 140 from Robinson gave them the second. The last leg saw Richard Ragless start with a ton, followed by 95 and 140. With 61 left he hit treble 7 and double top in two darts, moving them into the final and one step further than they managed last year.

The second semi-final saw the Todd siblings take on Caz Taylor (Richmond Rebels) and Ian Dendy (QE2 Galleon). The first leg saw tons from both Taylor and Dendy, but consistency from the Todds, and a 140 from Mark Todd, kept them in the lead.

On his next throw Mark Todd only needed two darts to hit the double to take the leg. The second leg again saw steady darts from the Todds, but a 111 from Taylor kept them close. A miss from Taylor at the double left Mary-Jane a chance, and with the third dart she hit double 12 to take another game 2-0 and the second spot in the final and one step further than they managed last year.

The final saw both of last years semi-finalists getting one place further in the knockout, with the Ragless duogoing first as they won the bullseye. It was close until the end of the leg with both Richard Ragless and Mark Todd hitting tons, but it was the Todds who took the first leg.

The second leg saw Mary-Jane Todd get scores of 120 and 85, helping her team into a good lead. Richard Ragless managed a ton towards the end of the leg, but it was too late as Mary-Jane was on her double and finished it off in style to take the leg and the match with another 2-0 win, making herself & Mark Mixed Pairs Champions 2017.