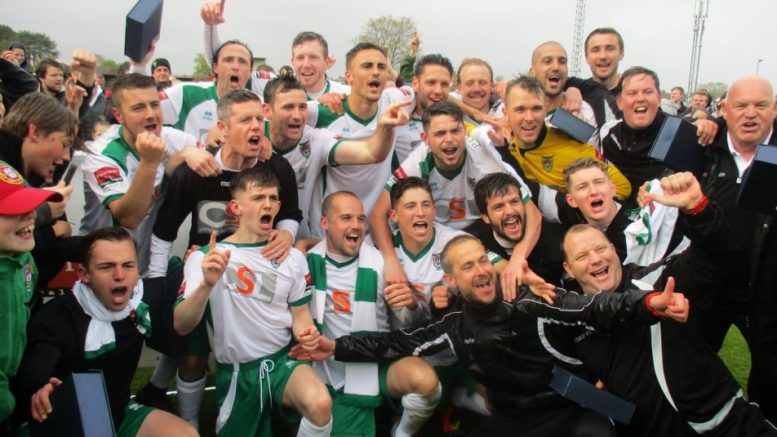 Martin Burford has urged businesses to get shirty with Bognor Regis Town. For the lifelong football fan says his company achieved their goals with the sponsorship of the Rocks during a successful season on the pitch

Now he has endorsed the Bognor’s bid to attract new sponsorship to help them tackle the demands they will face in the National League South following their dramatic play-off promotion triumph.

They battled their way to a 2-1 victory over Dulwich Hamlet to secure promotion from the Ryman Premier league in the last game of the season in front of more than 3,000 fans at Nyewood Lane.

And the club are already making preparations for the step-up to the NLS – and attracting more sponsorship is crucially important to ensure general manager Jack Pearce can keep key players who played a vital part in promotion, as well as attracting new talent.

Burford’s company, Concise Surfacing Limited, won the main prize in last summer’s sponsor’s draw to have their logo emblazoned on the famous green and white tops – and away shirts – along with a host of other benefits such as four season tickets with match day hospitality and programme advertising.

The sponsorship opportunity is up for grabs once more thanks to the club’s annual event on July 18. And Burford insists it is an unbelievable chance to raise the profile of your company as well as supporting and being part of a “fantastic football club”.

He said: “We have enjoyed the experience tremendously and would urge anyone to get involved. To win the shirt sponsorship was brilliant at such a fantastic football club, but there there is so much more to it.

“I’m a long-time football supporter and have grown weary of the Premier League and all the money swirling around. We really felt part of the club from the off. Jack and everyone treated us so well and we thank them most sincerely for their super hospitality over the season.

“To watch players work hard for their success on the pitch while holding down jobs as well is brilliant and a great antidote to modern top flight football. Bognor’s football philosophy of pass and move is admirable and always attractive to watch.

“On a purely commercial front, I have honestly seen an upturn in business from the exposure of the company. I can’t tell you the amount of times people have stopped me to chat about the Rocks. I shall be entering once more and hope I am lucky again. Someone’s got to win it!”

Pearce says the club is hopeful that the success last season and the increased media coverage attained will attract more companies. He said: “We want to give it a go in the National League South and build on the promotion but to do that we need to try to attract more sponsors to the club. It’s heartening to hear Martin’s words of encouragement about the club and what we are trying to achieve. if you would like to get involved, please call me on 07977 272990.”