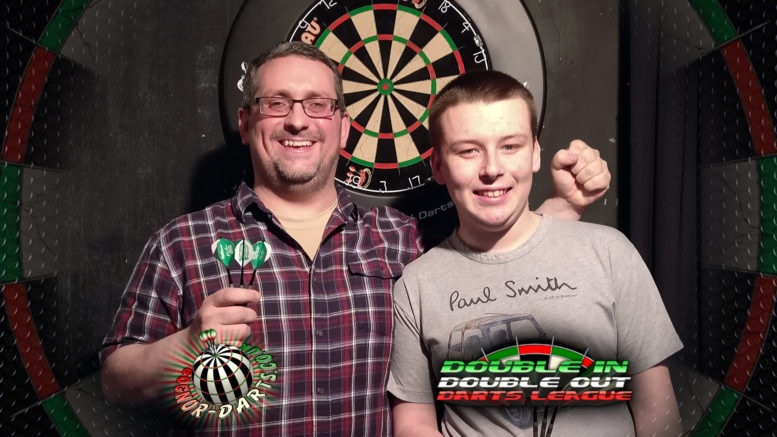 Trish Kidd and Ian Hackett enjoy darts victories as players contested in the Bognor Tuesday Double In Double Out League.

With only one week to go before the end of the season, the captains and secretaries knockout and the ladies knockout have taken place at the Newtown Social Club.

The preliminary round saw two of the three matches go to the pairs games, with the Neptune, Cabin Cruisers, and Newtown Raiders going through to the first round. Darren Whiting (Claremont Samba’s) hit a 100 in-shot in their preliminary match, but they lost to the Cabin Cruisers. Ashley Clements, the secretary of the POW ‘B’, managed a 180 on the way to winning in his game, but they lost in the pairs leg to last years champions, the Monters. Adam Hall, vice-captain of the Friary Arms team, managed a 174 in his second leg, but they lost the game in the pairs to the Wheatsheaf.

The first semi-final saw Nick Hales & James Bartley (the Monters) against Les Totham & Sam Burgess (Wheatsheaf). Hales had hit a 160 in-shot in the first round, on his way to a 14 dart winning leg. This game went all the way to the pairs game, and for the second time on the night the Monters won in sudden death, making the final for the second year on the trot. The second semi-final saw Lee Chapman & Phil Hayers (Neptune) take on Karl Wingate & Ian Hackett (Newtown Raiders). Wingate & Hackett lost out in the preliminary round last year, and that nearly happened again this year against the POW ‘A’, but they stepped in up a gear to take this game with a 2-0 win, with no need for a pairs game.

So the final first saw Wingate and Hales in the captains game. Hales won the bull to go first and started with his first throw, but Wingate had trouble hitting the in-shot. By the time Wingate started, it was too late. Hales was on his double and hit an 86 out-shot for a 21 dart leg. Wingate started ok in the second leg and the scores were shared all the way down the board, until Hales hit a 121. A few throws later and Hales won the game.

The Secretaries game saw Bartley & Hackett go face to face. Both players missed the doubles to start with, but then the score stared coming, both players hitting big, but the first out-shot came from Hackett. The second leg saw some lower scores to start with, but eventually Hackett picked it up and hit double top in 1 dart, taking the match to the sudden death pairs game. Both Wingate and Hales missed the in-shot to start the pairs game, but Bartley and Hackett got the teams going.

Wingate & Hackett took the lead, but a ton from Hales pulled the lead back. At the end of the leg both teams started missing doubles, but eventually the double was hit by Hackett, making Wingate & Hackett from the Newtown Raiders the Captains and Secretaries knockout champions 2016/17.

The Ladies knockout saw 9 players step up. Two down on last year, but only a few missing from the regulars that played during the season. The preliminary round saw only 1 match between the reigning champion, Trish Kidd (Cabin Cruisers), and Rhonda West (Newtown Raiders). Unfortunately West was whitewashed in the first leg after not being able to get the double in-shot, and then lost the match to Kidd. 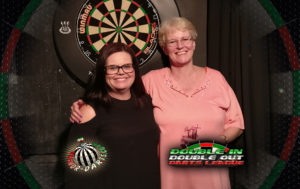 The first round saw an 84 out-shot on the bull from Karen Wilson (Newtown Raiders), as well as a 116 in-shot from Hayley Gatford (Hunston Club), both on their ways to meet in the first semi-final. It wasn’t to be for Wilson however, as Gatford managed to take the win and the place in the final.

The second semi-final saw Emma Bist (POW ‘A’) take on Kidd. Bist had no trouble knocking out her own sister and team mate Anji Evans. in the first round, and felt comfortable in her game. Kidd hit 3 tons on the trot in the first leg and duly finished by hitting double top.

The second leg saw Bist take it to the reigning champion in an awesome leg of darts, taking it to the third leg. The last leg saw Kidd hit a 180 and then a 140, but she was still trailing Bist who was more consistent in her scoring. Both players missed a few out-shots, but eventually it was Kidd who had the luck, taking the second leg and the spot in the final.

The final saw Gatford versus Kidd, with Kidd going first after winning the bull. Both players hit their double to start, but Gatford found form and hit two tons on the trot. Her form dropped though allowing Kidd to catch up with her own ton. With 67 left, Kidd stepped up and after the first two darts had 50 left.

Gatford had 80 left, so Kidd only had one chance with her last dart, and she made it count, hitting the bullseye and taking the first leg. Gatford got off the mark first in the second leg, while Kidd missed her in-shot. But Kidd overtook with a 140, followed by a ton, and later another ton to leave herself 51. Gatford had nothing and was struggling, but it still took Kidd another 8 darts to hit the double, and taking the win and retaining the Double-In Double-Out Ladies Champion title.

Rowland on his game! He’s in fine form to help chalk up Friary victory over Hunston