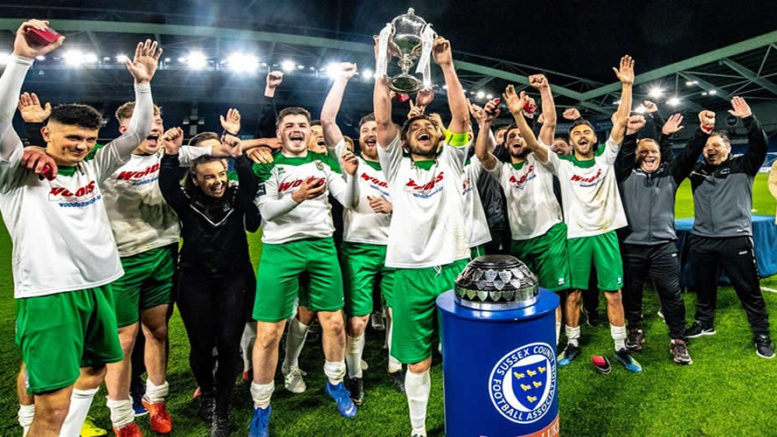 Bognor have lost the services of winger Mason Walsh as the fleet-footed flyer prepares to move to America to chase his dream of a career as a professional player.

Walsh provided many highlights during his season with the Rocks and fans would have seen more of the jinking wideman had he not suffered from a persistent hip injury which cut short the number of appearances he hoped to make for the Nyewood Lane outfit.

Walsh, who played for New Orleans Jesters before joining the Rocks, is off across the pond to increase his chances of making the grade as a professional. And he said: “The time I have spent at Bognor has been both enjoyable and rewarding but I see myself moving to the USA full-time to pursue a professional career and this is a great chance to do that.”

And while it cannot be argued that losing Walsh — son of former Liverpool and Pompey ace Paul Walsh — is a blow, it hasn’t hampered the mood of optimism at the club.

Bognor finished the season on a high by lifting the Sussex Senior Challenge Cup with a 2-1 AET victory over Burgess Hill Town last week at the Amex Stadium, home of Premier League side Brighton & Hove Albion.

Goals from striker Jimmy Wild and midfielder Doug Tuck, a late substitute, secured the silverware giving the Rocks the cup for the first time in 32 years.

Manager Jack Pearce was in charge of the team back then and it was he who was at the helm to help steer the successful glory bid this time of asking, too. Getting their hands on the pot was a boon for the Rocks given that the side missed out on a play-off spot in the Bostik Premier division as a woeful crop of injuries cost them dear.

And Pearce said: “It was a great way to conclude the season and I am absolutely delighted for the players, staff and the supporters. It’s always nice to land some silverware. Winning the Sussex Senior Cup at such a wonderful stadium and on such a superb occasion brings the curtain down nicely on this season and we will look to build on this success next season.”

Meanwhile, Pearce and head coach Robbie Blake have already begun the business of recruitment planning for the summer and to boost the process the club will hold an open trials session.

Rocks secretary Simon Cook said the club are looking to invite applicants to a trials open day in June, adding: “We want to add to the squad as the club look to mount a concerted challenge for a play-off position in the coming season. The trials day will be held on a Saturday in June, and players of all ages and levels of experience are invited to apply.

“Preference will be given to players that reside within an hour of Bognor Regis, as the ability to attend training twice a week is important. All applications will be acknowledged.”

Players who are keen to attend should email Simon — at sajcook2@aol.com — with their age, football experience, playing position and location.