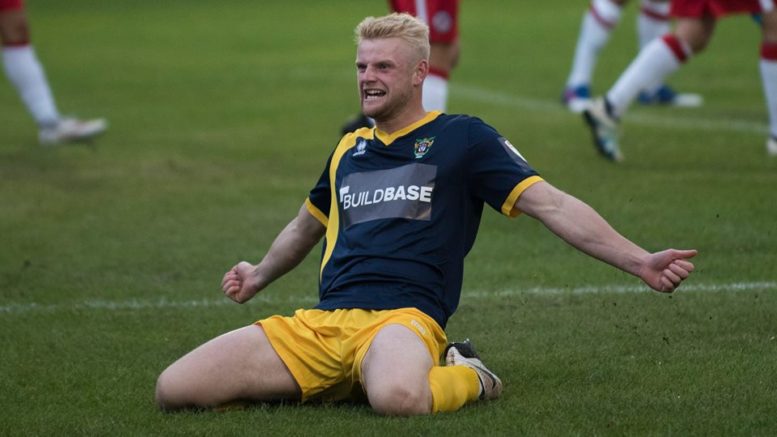 Corey Heath is emerging as a pivotal player for the Rocks after his summer capture from rivals Worthing. The central defender, 21, scored a powerful header to open the scoring for Bognor as they earned a well-deserved point from a 2-2 draw at Poole Town last night.

It followed an opening day 3-2 victory at home to Bath City on Saturday when Jack Pearce’s men kicked off their Vanarama National South campaign.

A goal-scoring centre-half is a big bonus but, clearly, it is the defensive capabilities of Heath which could prove invaluable over the course of the season; the division provides a higher standard with bigger, quicker and stronger opponents following the promotion from the Ryman Premier. 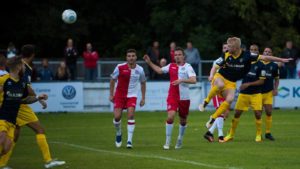 He has already formed a good understanding with vastly experienced central rearguard partner Sami El-Abd, with the latter embracing the organisational leader role in the back four in front of the ever impressive Dan Lincoln.

Heath, brimming with youthful exuberance harnessed with tenacious tendencies, appears to be very much a no-nonsense defender; an enforcer who exudes confidence, desire and no lack of spirit as he goes about his game.

He clearly knows how to defend. And, as we saw against the Dolphins at the Tatnam Ground, he has an eye for a goal. He stole in unmarked to give Rocks the lead after just eight minutes from a corner with an unstoppable header.

Pearce’s charges then conspired to go 2-1 behind before Jimmy Muitt scored a corker to snatch a share of the spoils for the visitors. It was no more than they deserved and they were by far the more dominant outfit in the last 20 minutes.

Next up Bognor go to Welling. Let’s hope they fail to track Heath at corners, too.