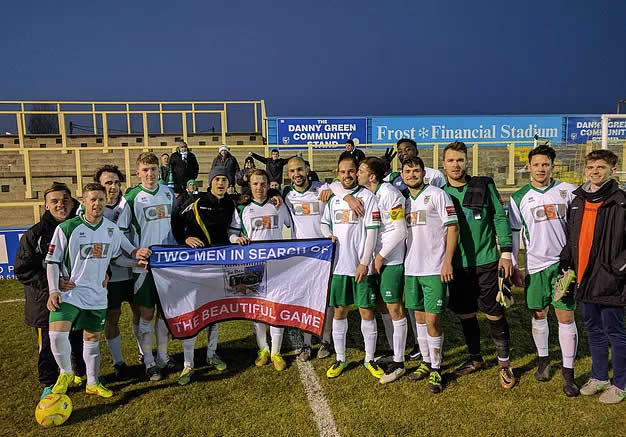 Jamie Howell will pull out all the stops to extend potent striker Elijah Adebayo’s loan stay with league leaders Rocks.

Fulham forward Adebyao, 18, hit a hat-trick for Bognor in the 5-0 thumping of Canvey Island (Rocks pictured after the victory) at the weekend; a win that keeps Howell’s men top of the Ryman Premier League

Adebayo is two weeks in to his month loan period and has four goals already — and he has also made an impact with his movement and attitude.

Howell, who saw the goal-getter snatch a treble agains the Rocks earlier in the season when on-loan at South Town, believes an extension would suit all parties.

“We’d very much like to keep Elijah for longer than the initial month but it very much depends on what Fulham want to do. I think the move is good for him, his confidence and development but we will have to wait and see.”

“We’ve obviously been very pleased with him and what he brings to the side but the decision rests elsewhere — let’s hope something can be done.”

Rocks bid to extend their lead at the top of the pile when they host rock-bottom Grays Athletic on Saturday. They then travel to Burgess Hill Town on Tuesday, January 31.