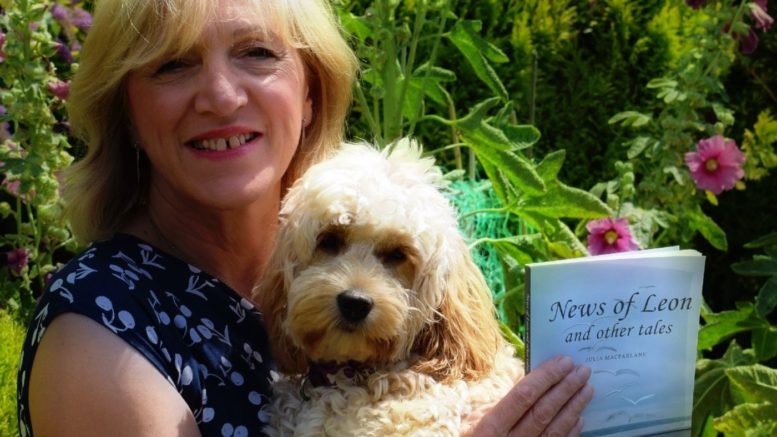 Author Julia Macfarlane has scored a hat-trick with her latest publication – she has now produced three books in a single year.

With News of Leon, it is the first time she has collected any of her short stories together in one book although her work has appeared in various anthologies and magazines over the years.

Julia said: “I’ve pulled together the best of my most recent work and thought I would have a go at self-publishing. Some of the stories have been published elsewhere but it was time I brought them together.”

In News of Leon, she deals with business life, personal lives and impossible situations. From the amoral couple of friends in News of Leon and A Real Adventure to a modern twist on traditional fairy tales in The Invitation and The Stepmother’s Tale, every story casts a sideways glance at life.

Anyone who’s owned a pet may enjoy A Shaggy Dog Story and All I want For Christmas may bring a tear to your eye. Anyone who’s faced redundancy will appreciate the resourceful employees in BLS Bikes. And anyone who’s endured, or even been, the incompetent intern will love the shenanigans of Messehalle Blues.

There’s lots of fun in A Christmas Surprise and even the odd ghost story to tingle your spine.

Her other two books include A Blast On The Waverley Whistle, the first anthology of the Bognor Regis Write Club which she runs. The group is currently putting together its second anthology with a planned publication date of October.

Her second book, Chichester Ghost Tour, was a collaboration between the writers group and CHINDI (Celebrating & Helping Independent Authors) which came out in May.

Julia and fellow writers from CHINDI gave a highly entertaining tour of this tongue-in-cheek walk as part of the Festival of Chichester. The book is available as a self-guided (optional) pub-crawl on Amazon and in shops around Chichester. The tour was so successful that Julia is planning to repeat it on Halloween Night and is prepared to offer the tour to organised groups by prior arrangement.

If you would like to know more, email Julia Macfarlane at bognorwriters@gmail.com.